Right after Thanksgiving I began searching for something…..anything regarding the 2007 White House Christmas Card. I had so much fun last year researching the article I wrote and published here at American Presidents titled Have You Received Your Christmas Card From the White House Yet?, and I wanted to make sure I posted this year’s design as soon as it was made available.

I couldn’t find anything.

Then suddenly what to my bleary eyes should appear…..but one tiny mention in the official White House Christmas Program seen here.

I hurriedly read the program cover to cover and discovered the following:

Nestled in the Jacqueline Kennedy Garden beneath the branches of an Osage orange tree is Sylvia Shaw Judson’s bronze statue Gardener---the scene depicted on the 2007 White House Christmas Card, painted by David Drummond. Mr. Drummond is a watercolorist whose landscapes represent the beauty seen at out national parks. Look for Mr. Drummond’s original watercolor painting of the 2007 Christmas card in the East Foyer, along with an original painting by wildlife artist Michael Glenn Monroe, whose illustrations decorate this holiday booklet.

So, I knew who the artist was, I knew what the scene would be, but no image.

I was amazed. Wasn’t there an official showing of the card? Didn’t some White House photographer snap it as they took other official photos? Apparently not.

As in year’s past wasn’t there an outcry regarding was was on it or not included on it? Nope, at least not yet.

Perhaps the Bush family was as behind in their holiday preparations as I am and were going to be late sending the annual White House greeting…..

Last night my daily Google search since Thanksgiving paid off. Finally…..I saw this: 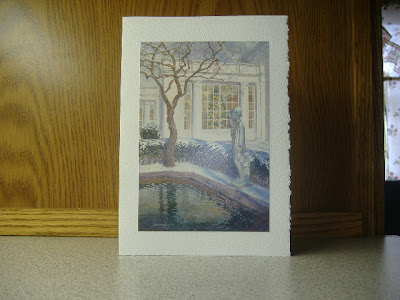 There’s the statue in the garden named for Jackie Kennedy and as promised it is a watercolor.

Here’s the inside that contains a verse from Nehemiah (9:6) 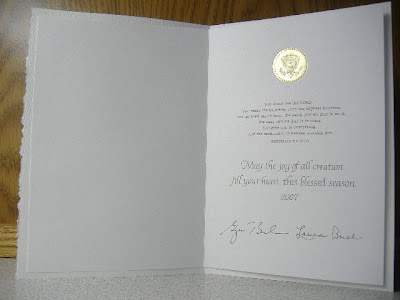 A huge thank you goes to Michael Swartz at monoblogue. He actually had the honor of receiving the card you see in the images above. He receives my undying gratitude for giving me his permission to post the pictures here in what seems to be the second time the official White House Christmas Card for 2007 card has had a mention along with an image on the Internet to date.
Posted by EHT at 4:51 PM

You're welcome. Glad to be of service.

And I learned a few things from your site as well, so it turned out to be a win-win for both of us.

We actually got that Christmas card sent to us .We have never before or not since gotten one. Thanks for your reminding me how special it was to receive it. I wonder how we can get it again this year. I am going try and research it.