I usually have to make a trade off each year in order to claim the privilege of teaching history. The trade off is teaching Language Arts as well to one or two groups of students. One of the writing assignments I provide students with each year is an essay regarding the different places they have lived, or if they haven’t moved around a bit they can write about their present home.

I might as well be telling my fourth graders we are going to move a pile of bricks from one location to another over and over for the entire day when I introduce a new writing assignment. The minute I even announce a writing assignment a wide assortment of groans and moans escape the mouths of my students. I can’t really blame them because in my own writing life I don’t want to be given a topic and then told to perform right then and there. Writing is personal. You have to want to do it. You must be connected to your topic in some way, and sometimes it just takes time.

Therefore I often try to get students motivated with some sort of connection-building exercise. I tell them some sort quirky detail from my own life (I have several), I read a short story aloud to them, or I have also shown a video clip. I follow this with a discussion where as a whole group we brainstorm various points they could include in their writing.

In order to motivate students to write about their homes I like to use Thomas Jefferson as my bridge.

There are so many things to think about when you bring up the name Thomas Jefferson. His role as an American Patriot, writing the Declaration of Independence, his love of great food, wine, and conversation, the Louisiana Purchase, or even the election of 1800 are just a few of the things that come to mind.

However, when posed with the question regarding Jefferson’s residence it is so very predictable the answer will always be Monticello. From the first moment we see a nickel Jefferson’s beloved Monticello becomes ingrained in our memories. Even when students don’t know the name Monticello they always tell me his house is on the nickel and many want to prove it by pulling a nickel out of their pocket.

Monticello, however, isn’t the only spot Jefferson described as home.

Thomas Jefferson’s father, Peter Jefferson, owned many different plots of land in Virginia. Thomas Jefferson was born at Shadwell situated near Charlottesville. The land was named after the area where Jane Randolph Jefferson, Thomas Jefferson’s mother, had been born in London. Historian Willard Sterne Randall in Thomas Jefferson: A Life describes the Jefferson ancestral home as a simple farmhouse in the middle of a horseshoe of outbuildings in a clearing at the edge of the Virginia wilderness overlooking the Rivanna River. Our third president was born there on April 13, 1743. 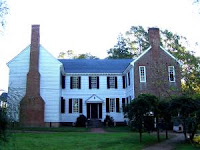 Jefferson left Shadwell at the age of two to move with his family to Tuckahoe Plantation (seen at left) in Goochland County, Virginia. Architecture historian Jack McLaughlin states in his book Jefferson and Monticello: The Biography of a Builder the Jefferson family moved to Tuckahoe due to a promise Peter Jefferson had made to his friend William Randolph before Randolph’s death. Randolph would be leaving behind two underage children and he wanted Jefferson to mange Tuckahoe until his son, Thomas Mann Randolph, Jr., was able to manage the plantation .

Seven years of Thomas Jefferson’s childhood was spent at Tuckahoe Plantation. Today Tuckahoe is listed on the National Historic Register. It is a private residence, but it is open for tours and events as well. It is thought to be one of the finest early 18th century plantations in America. The home’s “H” shape is unusual and the property contains many of the original out buildings including a schoolhouse where it is said Thomas Jefferson attended for awhile. In his autobiography Thomas Jefferson remembered his years at Tuckahoe fondly especially the spaciousness of the home as compared to Shadwell.

Once Peter Jefferson’s promise to William Randolph was completed the Jefferson family moved back to their farmhouse at Shadwell. Randall advises in his book that once Peter Jefferson returned to Shadwell he set about expanding the home to fit his growing family. The nine year old Thomas Jefferson began to think it was natural to live in a continuous construction zone….something he carried over into his adult life. Later after Peter’s death and Thomas Jefferson’s classical education began he would return to Shadwell during interterm breaks where he spent much of his time studying and walking up the mountain where he would one day build Monticello.

Unfortunately all that exists of Shadwell today is a historical marker (see first picture) and a foundation that has been excavated. Some years after Peter Jefferson’s death on February 1, 1770 the home was destroyed by fire and the family had to find a new home. Thomas Jefferson’s mother and sisters took up residence in the overseer’s home while Jefferson was boarding in Charlottesville. Is is said the fire sped up the construction at Monticello.

We are familiar with the vast library of books Thomas Jefferson donated to the Library of Congress, however, it was Jefferson’s second library. His first one was destroyed unfortunately in the Shadwell fire. McLaughlin advises it contained law papers, personal correspondence, records, accounts, and the books of a man whose writings and books were the nature of his exsistence. This was not only a personal loss for Jefferson, but a heavy blow to Jefferson scholarship since all the records of his formative years were destroyed.

At the age of 14 Thomas Jefferson received his inheritance of approximately 5,000 acres of land and many slaves. Before he began managing the land he was sent to the home and school of Minister James Maury from 1758 to 1760. Rev. Maury lived near Gordonsville, Virginia and his school was known for heavy classical studies including manners and morals, math, literature, history, geography, Latin, and Greek. James Madison and James Monroe also went to the school. In his autobiography Thomas Jefferson referred to Rev. Maury as a “correct and classical scholar”.

Following his stint at Maury’s school Jefferson’s next residence was the Sir Christopher Wren Building at William and Mary. Constructed between 1695 and 1699 the building was considered old when Thomas Jefferson lived there though the building had been gutted in a fire in 1705. Today the building serves as faculty offices and classrooms.

In 1768 work finally began on Monticello. Jefferson moved into the South Pavilion (an outbuilding) in 1770. Historians often refer to this Monticello as Monticello I which refers to the home he built to raise a family while he served in Virginia’s House of Burgesses, the Second Continental Congress, and as governor of Virginia. If we could travel back in time we would be surprised at Monticello I. The Thomas Jefferson Wiki states the first version was less ambitious and more modest in size. By 1782 the home had been enclosed but in a letter written twelve years after his return from France Jefferson stated he was “living in a brick kiln” which could mean the interior was not complete. Monticello II incorporated many of the ideas Jefferson brought back from his stay in France, and is the home that can be toured today.

During Jefferson’s years in Paris he first resided with the American painter John Trumbull, but

eventually moved to the Hotel de Langeac, located on the Champs-Elysees at the corner of Rue de Berry. Unfortunately the building was torn down in 1840. A wonderful article from American Heritage magazine provides a great look at Jefferson in Paris. The image seen to the left looks down the Champs-Elysees through the Grille de Chaillot. Jefferson’s Paris home is seen on the left near corner. It is said he began remodeling the property as soon as he moved in. Langeac taught him a number of architectural lessons, which he would incorporate into Monticello, among them the use of skylights to adequately illuminate interior windowless rooms and the realization that the skylights could be made weather tight.

Poplar Forest (below) became the site where the Jefferson family went after the British invaded Monticello in 1781. The property had come Jefferson’s way following the death of his father-in-law, James Wayles. At the time there wasn’t much there but fields and an overseer’s house. When attempting to compute the national debt the then President Jefferson was caught up in a rainstorm while visiting Poplar Forest. The president had to take refuge in the cramped overseer’s home, and realized the advantages of having a quiet place even though he was elbow-to-elbow with the overseer’s wife, children, and pets. 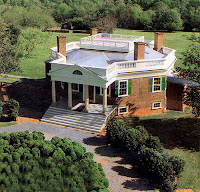 By 1801 Thomas Jefferson was very public person. He was known very well and people clamored for his attention. It isn’t surprising that Jefferson would have looked for a quiet place to simply be the private Jefferson. Construction began at the Poplar Forest retreat in 1806.

“More and more it is becoming clear how very important Poplar Forest is to our enlarged understanding of Thomas Jefferson and the reach of his imagination. That Jefferson was, along with so many other things, one of the premier American architects, has been long appreciated, but the originality and ingenuity of Poplar Forest—especially now that it is being so superbly restored—raise his standing still higher. This is an American masterpiece by a great American artist who also happened to be President of the United States .”
A letter written by one of Jefferson's granddaughters explains what Poplar Forest meant to him.
Many of my students move and move often. By discussing Jefferson and his many different residences students can connect to an important historical figure and can compare and contrast the reasons for moving as well. The process begins to get children to focus on what different residences can provide as well as honing in on how a residence can shape a person regarding their outlook on life’s pursuits.

Research note: A few web sources indicate the Jefferson family moved to Edge Hill. While it is a farm that scholarly sources state belonged to Peter Jefferson I could find no sources that confirmed Thomas Jefferson lived there. At one point the property at Edge Hill transferred to Jefferson’s sister and her husband (a member of the Randolph family) which could add to the confusion.
Posted by EHT at 2:07 PM

I like to book the very first tour of Monticello for my students. The morning fog and dew bring an almost still and eerie quality to the top of the mountain and house; my students always seem to be transported to the past.

Of all the homes I visit, this is the one I photograph the most.

Poplar Forest is a gem. One might consider bringing a student group here instead of Monticello for a more intimate experience. During the first weekend of May, Thomas Jefferson is in residence there.

Both homes have educational programs for schoolgroups and adults/educators in archeology.

Another nearby home to visit is Monroe's Ashlawn, they have wonderful hands-on programs.

Just as a note, I also posted about my tours at these houses if you want more information!