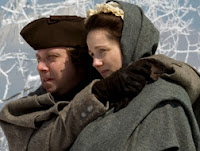 As March approaches I’m getting very excited about the HBO Films miniseries John Adams. Colin Callender, the president of HBO Films, describes the miniseries, based on David McCullough’s Pulitzer-winning biography, as a moving love story, a gripping narrative and a facinating study of human nature.

Filming occurred in many different locations including Budapest, Hungary, but four locations in Virginia were also used including Colonial Williamsburg’s Historic Area and locations around Richmond, Virginia.

An extensive list of the actors and the roles they will be playing are listed at the IMDB site including Paul Giamatti as John Adams and Laura Linney as Abigail Adams. David Morse will play George Washington, Tom Wilkinson will take on the role of Ben Franklin, and Stephen Dillane will play the part of Thomas Jefferson. Many of the features of the IMDB site are currently empty; however, there are already several interesting tidbits in the trivia section for the miniseries including the fact that many of the civilian costumes were previously used in British television productions. Many of the costumes were maked with the letters “BBC” on the interior. I think that’s kind of ironic!

In an interview with Paul Giamatti published at the website Rotten Tomatoes he states:

“[John Adams] was a weird guy. For people who come to these things expecting this sort of iconic, Thomas Jefferson, George Washington, white, marble bust kind of thing. He was kind of a lunatic. He was a hypochondriac, he [had a] violent temper, he was constantly sticking his foot in his mouth. He was a nightmare of a guy.”

“It’s much more a kind of political history because he sat the war out. There are no battle scenes in it. It’s all about him wandering around begging for money. I don’t know how interesting that will be, but that’s what he did the whole war. He kind of traveled around Europe trying to get people to give money to finance the war. And he was sick all the time and out of his mind and depressed. He was a really weird guy.”

Laura Linney prepared for her role by getting her hands on as many books as she could. She stated in an interview for Entertainment Weekly, “At the moment I’m steeped in books about [John Adams’] wife, Abigail Adams. I’ve read about five of them. There’s the McCullough [biography]

, which is about Thomas Jefferson. It’s coming out my pores, all this stuff. American history is wasted on high school sophomores. I remembered not a thing.”

When HBO Programming group president Michael Lombardo and co-president Richard Piepler traveled to show it to David McCullough, Piepler reported they had natural trepidation that you are showing it to the master, [but McCullough] had tears in his eyes.

I found all of the comments above interesting, however, if folks rely simply on Giamatti’s thoughts that Adams was weird, and he isn’t sure the miniseries will be interesting, they might opt to watch something else.

I just hope the tears Richard Piepler saw in David McCullough’s eyes were tears of joy and not anger and frustration.
Posted by EHT at 8:16 AM

Giamatti is right about Adams. John Adams may have had the most fervor in wanting independence from Britain, but he couldn't possibly be the one to take it to the king because he was "obnoxious and disliked" as they stated in the musical "1776". i think that movie portrays a good John Adams...sure he may not have been like by a lot of people, but he was determined, strong headed and assertive. Those aren't such bad traits for a politician.

Such of fan of HBO. They do such a great job of bringing great historical events like our independence from Britain to life. I've always been intrigued by history, especially American history, and this mini-series has shed a whole new light on the process and evolution of our country as we know it today.

What I can't seem to figure out is why Mrs Adams decides to give "the plague" or whatever that disease was, to the rest of her family.....intentionally. Maybe I just missed something. Does anyone know the answer?

"What I can't seem to figure out is why Mrs Adams decides to give "the plague" or whatever that disease was, to the rest of her family.....intentionally."

This is made clearer in the book. She was getting the kids immunized with a weak version of the pox in hopes it would spare them from the more severe form of the disease that was spreading. It worked.

I disagree- Giamatti was both inarticulate and incorrect about Adams. "[John Adams] was a weird guy" is a horribly simple way to describe a character. Why was he weird and why should his unusual traits encourage us to watch the mini-series? (I have watched it and I delighted in it.)

Laura Linney was obviously much better prepared for the role and it shows in the mini-series. Giamatti should have researched his character more, because I feel that he comes off harsher and more depressed than Adams.