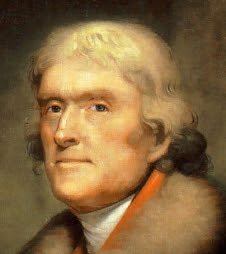 Thomas Jefferson has a profile up at LibraryThing! This website description notes, "Enter what you're reading or your whole library—it's an easy, library-quality catalog. LibraryThing also connects you with people who read the same things."

Jefferson's profile gives and annotated and completely searchable version of the 4,889 books he donated to the Library of Congress. Do you and President Jefferson have any book in common?

A fully annotated version of my library is available here. This is the digital version of The Catalogue of the Library of Thomas Jefferson, a five-volume scholarly bibliography compiled by E. Millicent Sowerby and published by the Library of Congress, 1952-1959.

One of Sowerby's major sources was my own handwritten library catalogue, begun in 1783 and continuously amended through 1814. Now at the Massachusetts Historical Society, that catalogue is available online, here.

When my library was sold to Congress, I sent along a manuscript catalogue presenting the books in a particular order, which I described to the Librarian of Congress as "sometimes analytical, sometimes chronological, & sometimes a combination of both." Unfortunately, that catalogue was retained by Mr. George Watterston when his tenure as Librarian ended in 1829, and has not been found.In the 1980s, librarians James Gilreath (Library of Congress) and Douglas Wilson (Knox College) discovered a manuscript catalogue of the collection - with the books in the order I preferred - created for me by a young gentleman named Nicholas Trist in 1823. This list, published by the Library of Congress in 1989 as Thomas Jefferson’s Library: A Catalog With the Entries in His Own Order is available in digital form, here. The notation for each title from this list can be found in the Comments section.
Posted by M at 10:23 AM

I've been using LibraryThing for three years. Nice to see the Sage of Monticello who said, "I cannot live without books," has found it as well.