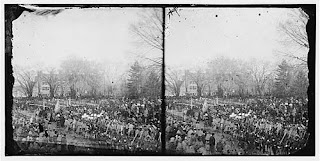 Here is the text of the Library of Congress’ announcement:

Details of Abraham Lincoln's second inauguration come into clearer focus with the recent discovery at the Library of Congress of three glass negatives that show the large crowd gathered at the U.S. Capitol in Washington, D.C., for the president's address on March 4, 1865.

These negatives had been labeled long ago as being either the Grand Review of the Armies or the inauguration of Ulysses S. Grant. Carol Johnson, a curator of photography at the Library of Congress, spotted the misidentification on Friday, Jan. 4, while checking old logbooks and finding the annotation "Lincoln?" in the margin. Only two other photos of Lincoln's second inauguration were previously known, but a careful visual comparison confirmed that these three negatives portray the same event.

"These negatives add to our knowledge of this special event," said Johnson. "They show what that wet Saturday looked like with the massing of the crowd. They also convey the excitement of the people."

Johnson was prompted to examine the negatives after a Library of Congress patron alerted her to the fact that these visually similar photos had radically different identifications in the Library's online Civil War photographic negative collection. But instead of choosing between Grant and the Grand Armies Review, she opened a new door to the past by looking closely at the images and recognizing Lincoln's second inauguration.

Here are the photo links:

The Library's American Memory online presentation "I Do Solemnly Swear" offers a special look at Lincoln's second inauguration, including the handwritten text of the address, which is part of the Library's Abraham Lincoln Collection in the Manuscript Division. Visit http://memory.loc.gov/ammem/pihtml/pi022.html. Lincoln's second inaugural address, coming just a few weeks before the end of the Civil War, contained such stirring phrases as: "... With malice toward none; with charity for all; with firmness in the right, as God gives us to see the right, let us strive on to finish the work we are in; to bind up the nation's wounds ..."

The Library of Congress Prints and Photographs Division currently includes about 14 million photographs, drawings and prints from the 15th century to the present day. International in scope, these visual collections represent a uniquely rich fund of human experience, knowledge, creativity and achievement, touching on almost every realm of endeavor: science, art, invention, government, political struggle and the recording of history. For more information, visit www.loc.gov/rr/print/.
Posted by M at 12:54 PM