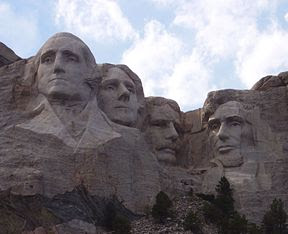 Mt. Rushmore is a famous landmark in the Black Hills of South Dakota. The faces of four American Presidents are carved into the mountain. According to a new book, this faces may last 7.2 million years (not forever but still a long time.)

The book is The World Without Us by Alan Weisman. A review in the New Yorker noted, "Teasing out the consequences of a simple thought experiment—what would happen if the human species were suddenly extinguished—Weisman has written a sort of pop-science ghost story, in which the whole earth is the haunted house. Among the highlights: with pumps not working, the New York City subways would fill with water within days, while weeds and then trees would retake the buckled streets and wild predators would ravage the domesticated dogs. Texas’s unattended petrochemical complexes might ignite, scattering hydrogen cyanide to the winds—a mini chemical nuclear winter. After thousands of years, the Chunnel, rubber tires, and more than a billion tons of plastic might remain, but eventually a polymer-eating microbe could evolve, and, with the spectacular return of fish and bird populations, the earth might revert to Eden."

While most signs of humanity vanish fairly quickly, not so the Presidents on Mt. Rushmore. Weisman wrote, "According to geologists, Mount Rushmore's granite erodes only one inch every 10,000 years. At that rate, barring asteroid collision or a particularly violent earthquake in this seismically stable center of the continent, at least vestiges of Roosevelt's 60 foot likeness, memorializing his canal, will be around for the next 7.2 million years" (p. 182).

If society collapses, and then comes back some distant time in the future, I wonder what they will make of Mount Rushmore? I am guessing they will think the Black Hills were sacred and that these men are the representation of gods. Or maybe they will just think that whatever society built the monument had an overdeveloped ego.
Posted by M at 10:41 AM

I've been seeing promos for a documentary about this very thing. Actually, now that I think about it, I haven't seem them lately, so perhaps the documentary has aired by now. It's interesting and weird to ponder...and yes, reminds me that we're just a little (albeit destructive) piece in this puzzle.

I think when they see them they will assume they were built by giants and anything else large they find will confirm this theory.

According to Geologist?? Since when have they gotten anything half right? I have an 8th grade education, and it doesn't take any more than that to figure out someone is smoking wacky tacky to make claims of 'thousands of years' survival rates. The complete sculpture is less than 90 years old, and has required one major repair job already, due to spreading cracks from rain, snow and ice. The deterioration can be measured as to damage over years, let alone decades. As that rate is known to those making repairs, it is an absolute certainty that forward progression analysis will give a weathering rate to any decade in the future. Based on 80 years to damage control, I would suggest that as soon as budget, weather, cataclysms or catastrophes cause cessation of maintenance, the sculpture may not last 2,000 years in any recognizable form. Though I have no knowledge of the actual current decay rate, mine is an uneducated guess, and based solely on the fact that in 80 years, major repairs have been made. However, it makes more sense than so called 'experts' opinions, as far as I am concerned. (Is this an indictment of 'thought sciences' in general?) Absolutely. I don't trust Astronomers, Astrophysics, Anthropologist, Archaeologists, Oceanographers, Meteorologists, Theologians or Ancient Alien theorists to have a clue about the real world we live in. What they mostly have, are AGENDAS. Protect turf kind of agendas. Mt. Rushmore, because of it's location and local weather conditions, will not survive long in the cold hard winters of S.D.

hey, let's make a "Rosetta Stone" out of granit...