An Anachronism with Value 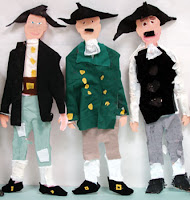 It was independent reading time. Many students were at their desks with books they had chosen from my classroom library. Some students were reading at the computers. Two or three had gotten on the floor up under the table portion of their desk. A group was at the back table huddled around a book about the Civil War rich with images. A child with special needs was partnered with another student, and every so often you could hear them reading to each other. Students were also coming and going to the media center. As one student would return they would quietly tap the next one on the shoulder so they could depart. I read during independent reading time as well, but I periodically eye the room and walk the room to make sure everyone is on task.

Occaisionally a student will become so excited about what they have learned or they get so involved with the action in the story they will want to share it with me. I noticed one young man had gotten up and was on his way back to where I sat. He stopped occaisionally to show his book to his friends and neighbors. I could tell by their reactions…..snickers, guffaws, and a continuous stream of hands slapped over open mouths….that whatever was in the book was something that shouldn’t be there, or it was something that was being misinterpreted.

Like the Pied Piper of Hamlin the reporting student soon had a stream of gawkers behind him. By the time he reached my desk there was a line of eight people behind the Pied Piper wanting to get in on the scandal.

I looked up from my book and said, “May I help you?”

A torrid of reports issued forth from each young mouth at the same time.

“I don’t think my mother wants me to see that word.”

“Why would they have that word in a book for kids?”

“It could mean a rooster. That word means that, you know…”

“My Daddy uses that word, but he put sucker on the the end of it.”

I held up one hand to silence the children before anything else was said that shouldn’t be and held out my other my hand for the book. The Pied Piper handed it over. It was a book from a series of biographies regarding the presidents that is very popular with school libraries. The books have all been reviewed and over the years I think I have read every single one of them at one point or another. The subject of Pied Piper’s book was James Monroe.

“Where’s the word you’re having a problem with?” I asked the Pied Piper. He pointed and there it was in black and white…..the word cock. Of course my young friends had just singled out the one word and alone it can have over fourteen different meanings other than the one that would be inappropriate for elementary age reading. The word was not alone on the page and taken within its entire context it did not mean anything remotely inappropriate.

“Hmmmmmmmm, “I said. “Can I hold your book for a bit? Perhaps we can discuss it later during Social Studies. Can you choose something else to read for the remainder of class today?”

The Pied Piper assured me that he could and we all returned to our reading.

Later I wrote the phrase “last of the cocked hats” on the board. We had a quick lesson reminding students that some words have several meanings and that when quotations are surrounding a group of words they should be taken all together for a particular meaning. The phrase that had set off the Pied Piper’s parade was used to describe President Monroe because he was the last of our presidents who participated in the American Revolution.

Then we had a short review regarding cocked hats and what they are. Many remembered we had discussed the hats many minutemen and other colonials wore during the 1700s. I attempt to develop a fashion sense in students regarding what was worn through various decades because I feel it is just one more skill students can rely on when analyzing historical information. I wrote about fashion sense in an introduction to this post over at History Is Elementary.

Tricorne or three-cornered hats were very popular during the 17th and 18th century. The tricorne style eventually developed into the cocked hat which was popular beginning in the mid-19th century. More than likely when you see an image of a tricorne the patriots and the American Revolution come to mind.

President Monroe was definitely an anachronism in that he continued to wear breeches and a cocked hat even though those items had fallen out of fashion. He wore what was comfortable for him. Even at their young age my students are very conscience regarding what they wear and what their friends wear, so I like to hit on the fact that Monroe was thinking very independently with his clothing choice. I ask them to brainstorm regarding reasons why Monroe chose Revolutionary dress rather than newer fashions. Some of the reasons why ranged from he couldn’t afford anything else (somewhat possible since Monroe had money problem) to he was simply more comfortable in the breeches and hat and that he didn’t care what anyone else thought.

To get kids into the mind-set of connecting to Monroe’s fashion sense I usually begin by asking them to write about a favorite piece of clothing they have. Perhaps it is a sweatshirt, a pair of jeans, a pair of shoes. I ask them to detail how the article of clothing came to be theirs and why it is a favorite. I encourage them to provide me with details that really tap into to their senses….how the article feels, how it smells (hopefully after being washed), and how it sounds as their body moves around. Finally, I ask them to address this question: If you could, would you always wear this article of clothing? Most say they would.

Early in his presidency James Monroe used his Revolutionary background to connect to the American people and to remind them concerning how our nation was created. He toured the nation three different times resulting in the fact that more Americans could boast they had seen their president with their own eyes than at any other time in the nation’s history.
James Monroe was not only an anachronism but he was considered to be the last of what is termed the Virginia Dynasty meaning that four of our first five presidents were from Virginia. There were several issues surrounding Monroe’s time in office….slavery, Native Americans, westward expansion, foreign relations following the War of 1812, and the young nation was still attempting to get a handle on the state and federal government relationship. It seems many folks had an opinion and very few wanted to compromise and agree on the best course of action to take regarding the nation’s problems. These problems could not be tackeled until the rift of party factualism had been tackled.

The first tour Monroe undertook was to New England and he paid for it with his own money. He traveled as any citizen would without pomp or ceremony. The President’s itinerary included important American Revolution as well as War of 1812 sites in order to honor veterans and to remind citizens how important certain events were in the founding of our nation.

The tours were very successful. President Monroe, an anachronism representing our nation’s founding and the “last of the cocked hats”, did a great job of tying together the memory of George Washington and patriot feelings to help heal some of the division in the nation caused by the War of 1812 and other national issues. Monroe is often remembered as the president who ushered in the Era of Good Feelings which is characterized by a time period of conciliation and compromise rather than partisan attacks. Actually the phrase regarding good feelings was bestowed by a journalist in response to the reactions stemming from Monroe’s New England visit.

Of course, the good feelings didn’t last and soon the nation was experiencing the Panic of 1919 and the debate over slavery came to the forefront again resulting in the Missouri Compromise of 1820, and by 1824 four men vied for the presidency resulting in cries of a corrupt bargain.

For a brief time, however, an anacronism reminded our country what it was to have a hunger for liberty and why we owe our Revolutionary forefathers so very much.
Posted by EHT at 11:23 AM