Apparent clue to JFK death likely a fake. Or is it? 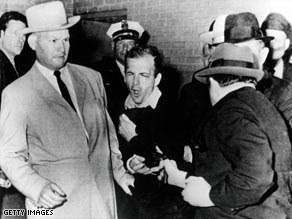 A new trove of material related to the Kennedy Assissination has been made available to the public. Included in this batch is an apparent transcript of a possible conversation between Lee Harvey Oswald and Jack Ruby two months before the murder of Kennedy. Details can be found at Apparent clue to JFK death likely a fake, DA's office says.

Do not get too excited. It looks like the transcript is actually an attempt at a movie script. The transcript was found in the same safe with a movie contract signed by former Dallas District Attorney Henry Wade.

"The fact that it's sitting in Henry Wade's file, and he didn't do anything, indicates he thought it wasn't worth anything," Curator Gary Mack of the Sixth Floor Museum said. "He probably kept it because it was funny. It's hilarious. It's like a bad B movie."

"It's not real. Crooks don't talk like that," Terri Moore said. "If that transcript is true, then history is changed because Oswald and Ruby were talking about assassinating the president."

Of course, if you believe in a conspiracy, maybe the transcript is real. Perhaps they (whoever "they" are) just want us to believe the transcript is fake. I think though that destroying the transcript if it was real would have been much easier. Wouldn't "they" have had plenty of time to have shredded this document? It must be a fake. If not...
Posted by M at 6:30 PM