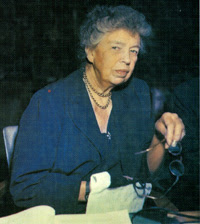 Astrocartography of Eleanor Roosevelt's Least-aspected Saturn. If you find astrology interesting, this First Lady horoscope may be of interest. The focus on how the planetary metaphor of Saturn was reflected in Roosevelt's life and work. It is always easy to intrepret this stuff correctly after the fact isn't it? It is by astrocartographer Rob Couteau. This may be bunk but it is interesting.

Eleanor Roosevelt was born in New York City, in the center of a Transcendental Mid­point-Field that extends from her Primary Saturn, which sets over the eastern sea­board, to her Secondary Uranus, which is positioned over the eastern U.S. in a vertical, Midheaven line that runs just west of New York State. This V-shaped Transcendental Field over the East Coast frames an area that played a primary role in her life: initially as the wife of Governor Roosevelt, of New York, and then as First Lady to President Roosevelt, in Washington, D.C.

One of the most “accomplished / and independent” (Primary Saturn / Secondary Ura­nus) of First Ladies, in 1933 she called the first press conference ever held by a president’s wife (Uranus rules “innovative action”). After F.D.R.’s death, she was a delegate to the U.N. Assembly; Chairman of the Commission on Human Rights; and U.S. rep­resentative at the General Assembly: positions all held within her Transcendental Mid­point-Field region, i.e., in the United Nations building, in New York. Again, these were “ground-breaking roles” (Uranus) for a woman of that period, especially since they represent positions of “serious social responsibility” (Saturn).
Posted by M at 2:34 AM