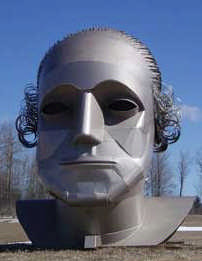 I recently finished reading a book titled Weird Michigan by Linda S. Godfrey. I was quite surprised that there is a giant head of George Washington in the town of Onaway, Michigan. This town is on the northern tip of the lower penisula.

RoadsideAmerica.com has this description of the head, "On Highway 68 just West of Onaway, Michigan a giant bust of George Washington rests in a field watching traffic go by. He appears to be made of stainless steel. I don't know the name of the artist, but the bust was fabricated in the nearby Moran Iron Works. An even more impressive sculpture of an eagle's head can be seen in the center of Onaway itself. This one features overlaid feathers that appear to be stainless steel and brass."
Tom Moran is the creator of the work. Weird America noted, "Gleaming in the sun as if elves had just given him a good polish, George appeared to stare thoughtfully towards the highway. We noticed that the field was adjacent to the Moran Iron Works and surmised that there might be a connection; turns out we were right" (p. 164).
I guess I am going to have to head up north and take a look at this someday. It looks fun. I hope I can convince my wife...
Posted by M at 7:45 PM

This looks more like Marlon Brando than George Washington.

lol, yeah their sculptures are nice, they (Moran Iron Works) come up with a new one every year to show off at the 4th of July parades.
But I don't really see how it's much of a big deal to come and see it, if you do maybe you should come up on the 4th, we have a nice Independence Day celebration then and it just seems a lot more interesting to come up then with more things to do, if you can spare the time that day.

How funny is this! I actually made my blog post today about the giant head I saw and photographed on my way home from Michigan. I decided just now to google it and see if I could find anything about it and I found you. There is one other thing I've found so far and I've gotten my readers quite intrigued about this so I think I'll post a follow-up tonight.