"I Had Rather Be Right Than President." 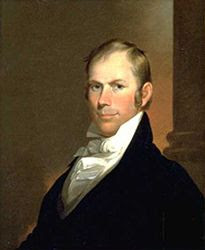 Henry Clay really wanted to be President of the USA. He never got his wish. However, he may have doomed his chances by making this statement. It came back to haunt in the election of 1840. Goldman does a good chance of describing the harm that Clay did to himself.

The venerable politician and statesman Senator Henry Clay of Kentucky believed his time to win the Presidency would finally be ripe in 1840. There were many obstacles to his winning the Whig Party's nomination. One of the most contentious issues in the country in the antebellum period was slavery. Clay tried to take a centrist position, but accusations flew in both the North and the South that he favored extremes. In the North he was accused of "being ultra" in favor of Southern slaveholders. In the South he was accused of being an abolitionist who plotted secretly to abolish slavery. (Remini, 525) As the historian Robert Remini explains, "It may have occurred to Clay that his apparent middle-of- the-road position invited attacks from both sides of the slavery question." (Remini, 525) Clay felt the charges that he was an abolitionist were detrimental to his chances for the presidency, and he needed to clarify his views on the slavery question. But he intended to stick to his views regardless of the political consequences. As he famously said, "I had rather be right than president."

In order eventually to capture the nomination he needed support from Southern Whigs, but at the same time, he needed support from the Northern Quakers who were passive abolitionists. The most important aspect was to distinguish himself from the most extreme abolitionists, the "ultras" which he did in a Senate speech on February 7, 1839. Clay's speech, "Petitions for the Abolition of Slavery," supposedly addressed a petition by Washington DC's residents to abolish slavery in the district. Clay actually wrote the petition himself.

The speech was Clay at his worse, which his supporters lamented. As Carl Schurz writes, "It was an apology for his better self. Formerly he had spoken as a born anti-slavery man, who to his profound regret found himself compelled to make concessions to slavery. Now he appeared as one inclined to deplore the attacks on slavery no less, if not more, than the existence of slavery itself." (Schurz, 164)
Posted by M at 6:00 PM

I don't know whether to be relieved or disheartened when I read about partisan politics from the past. I'm relieved in the sense that our current politicians and atmosphere is nothing new, and therefore, not an indication that we're doomed. But I'm disheartened to think that it's never going to change.