Elections are definitely on my mind as it is primary day in Ohio and I can't escape it (seriously between the ads and phone calls, I'm ready to scream!), so I did some searching on elections and found this great collection of election cartoons from Harper's Weekly. For the elections between 1860 and 1912, the site offers an election overview, cartoons, biographies and events. You even get explanations for each cartoon, which is great since some of them are pretty involved.
For the first election of Grant, let's look at the introduction and some of the cartoons:
By 1868 the United States had experienced several unprecedented, pivotal events since the last presidential election: the end of the Civil War; the abolition of slavery by the 13th Amendment; the assassination of a president; the impeachment and near removal from office of another president; and the continuing clash over the policies and implementation of Reconstruction—i.e., of admitting the former Confederate states back into the Union and of incorporating the freed slaves into the political and social life of the nation. In fact, many observers viewed the 1868 presidential contest between Republican Ulysses S. Grant and Democrat Horatio Seymour as a referendum on Reconstruction.
The Republicans had to defend the 14th Amendment (1868), which gave black Americans citizenship and prohibited state governments from violating the due process rights, the equal protection, and the privileges and immunities of all citizens. The amendment sparked controversy because Congress required its passage by unreconstructed states before they could be readmitted to the Union, and because it was ratified unenthusiastically even in some Northern states. Both party platforms sidestepped the important question of black manhood suffrage. The Republican platform endorsed the Reconstruction policy of requiring black manhood suffrage in the former Confederate states, while leaving the Northern and border states free to decide the matter. The Democratic platform condemned "Negro supremacy" and demanded a restoration of states’ rights without specifically mentioning suffrage. The readmission of several Southern states with large black electorates, however, forced the issue into the forefront. 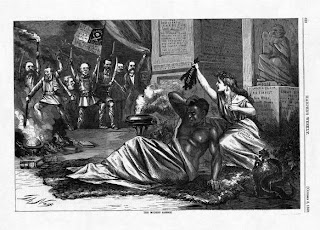 In March 1867 Congress enacted the first Reconstruction Act, with which the eleven former Confederate states had to comply in order to regain Congressional representation. Among the law’s stipulations was a requirement for black manhood suffrage. All but three states conformed, even though the demand for black manhood suffrage was very unpopular among white Southerners. (In 1870 the 15th Amendment would constitutionally oblige Northern states and the three unreconstructed Southern states to provide black manhood suffrage as well.)
This Thomas Nast cartoon alludes to the familiar biblical story of Samson as a way of emphasizing that voting rights (Samson's hair) is the source of societal strength for black men, which Southern Democrats (as Delilah) and their Northern allies seek to keep from them. Like other liberal Republicans, Nast considered political equality as both the foundation and safeguard of economic and cultural advancement.

In front of the Democratic politicos, a fire burns symbols of religion (the Bible) and knowledge (books, a scroll, and a globe). The writing on the center wall announcing “The Democratic Barbecue” refers to a typical 19-century political event by which candidates tried to rally public support (here, hypocritically of black men); it also echoes the catch-phrase “the great barbecue,” which signified political corruption. To the right is a statue of President Andrew Johnson as the “Moses” of black Americans, a promise undermined by his veto of Reconstruction legislation. Fittingly, he holds a tablet marked “veto” instead of the Ten Commandments. In the lower-right corner, a satanic copperhead snake (with horns like Seymour) laughs at Samson and his shorn hair.

I really love political cartoons. I might have to go to Amazon.com to see if there's a coffee table book on them.