The Kent State Shootings and the Boston Massacre: Parallels? 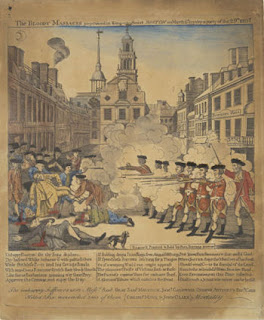 I was happy to watch the first two episodes of John Adams on HBO Sunday night. This was some great TV! I really liked how John Adams was portrayed.
The first episode deals with the Boston Massacre. It was an incident involving the deaths of five civilians at the hands of British troops on March 5, 1770. John Adams made an unpopular but principled choice to defend the British soldiers. Despite great odds, he was able to get the soldiers acquitted. This episode of the HBO series shows how difficult this was for the future American President.
As I watched, I was reminded of the Kent State shootings of 1970. On May 4th of that year, four students were killed by Ohio National Guard soldiers. In both the Boston Massacre and the Kent State shootings, a crowd of civilians were engaged in violent protest. Soldiers were outnumbered and the crowds were throwing items at the soldiers. In each case, there are reports that members of the crowd were taunting for the soldiers to shoot.
In both cases, shots were fired resulting in death. Both the American revolutionaries of the 18th century and the anti-war opposition of the 20th century used the shootings to make a case against the government. However, with all honesty, it is hard to blame the soldiers in each incident. It is understandable why the shootings occurred even if they could have been avoided.
This parallel had not occurred to me before watching this new series on HBO. I expect more great things from this show. John Adams lived an interesting life and this show is proving equally interesting.
Posted by M at 7:32 PM

Yes, I can certainly see the parallels: nobody totally guilty or totally innocent...just totally in the midst of the moment and crowd psychology. It's always fascinated and frightened me to see how easily things can get out of control...how easily swept away otherwise "sane" people can get.

Great parallel. I'll have to remember that one.

I'm enjoying the Adams miniseries as well....I put a few thoughts out today at History Is Elementary.

Giamatti and Linney are outstanding.