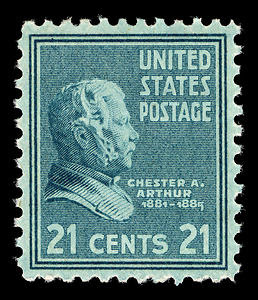 As postage just went up again, stamps are on everyone's mind. I found a neat 21 cent Arthur stamp at the Smithsonian's Postal Musuem (actually they have an entire Presidential series there if you are interested).
The image of Chester A. Arthur (1830-1886), the twenty-first president of the United States, appears on the 21-cent value of the 1938 Presidential Series. The likeness was taken from a bust on view in the U.S. Senate Gallery.
Arthur, a lawyer and a career politician, was the fourth vice president to ascend to the office of president, serving the remainder of James Garfield's term after Garfield was assassinated in 1881.
The 21-cent greenish blue stamp was printed only in sheet form and was issued on November 22, 1938. This was Chester Arthur's first appearance on a postage stamp.
At the time of the stamp's release, this 21-cent stamp would have paid a number of postal fees—a double-rate domestic letter (six cents) plus minimum registration (fifteen cents); a single-weight domestic letter (three cents) with minimum registration (fifteen cents) and a return receipt (three cents). Both these combinations of rates were in effect July 6, 1932, through March 24, 1944.
In addition, at the time the stamp was issued, a 21-cent stamp would pay for a one ounce airmail letter (six cents) with minimum registration (fifteen cents). This combination of fees was in effect July 1, 1934, through March 24, 1944.
Years later, this 21-cent stamp would pay for additional combination rates, including the fees for airmail, special delivery letters: from November 1, 1944, through September 30, 1946, a one ounce domestic airmail letter (eight cents) plus special delivery (thirteen cents), and from January 1, 1949, through December 31, 1951, a one ounce airmail letter (six cents) with special delivery services (fifteen cents).
Posted by Jennie W at 3:02 PM