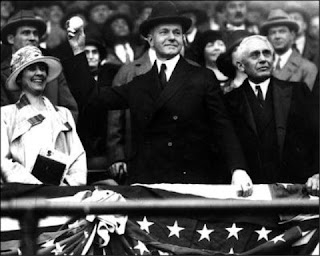 Baseball is as American as the presidency itself (although the reverse cannot always be said), and many a ball fan has occupied the White House.
Surprisingly, the greatest White House baseball enthusiast of all time was not to be found among our chief executives but rather among our first ladies.
This page by David Pietrusza talks about Grace Coolidge's interest in baseball - the "First Lady of Baseball."

Grace was a big Senators' fan:
In any case, during the Roaring Twenties, the First Lady could be regularly seen at Washington's Griffith Stadium, often chatting with Senators players (the Coolidges attended the wedding of Senators "Boy Wonder" manager Bucky Harris in October, 1926—of course, Harris had married the daughter of an administration official, Alien Property Custodian Howard Sutherland) and keeping hubby Calvin from bolting the park after perfunctorily performing his duties as ceremonial first-ball tosser.

"She used to come to games," Harris recalled, "and sit right by the Senators' dugout. She came to the games with Cal and stayed there when the President would leave early. and then she'd come to other games alone."

All the Washington players knew her and spoke to her. she was the most rabid fan I ever knew in the White House."

During the first game of the 1924 World Series which featured the local Senators versus John McGraw's New York Giants, the president, never one to idle time on entertainments, suddenly stood up to leave. Washington had never been in a World Series before. The immortal Walter Johnson was on the mound. It was the ninth inning, the score knotted at 2-2. Grace Coolidge sputtered, "Where do you think you're going? You sit down," as she grabbed his coat tails.

The chief executive sat right back down.

Grace even succeeded in getting Calvin to remain through all twelve innings of Washington's exciting seventh game victory. A photo of the first couple taken as the winning run scored shows Cal unusually animated and Grace looking like the cat that ate the canary.

Clark Griffith then brought winning pitcher Walter Johnson to the Coolidges' box. The president displayed customary restraint. "Nice work," he twanged, "I'm glad you won. But Mrs. Coolidge had no qualms about the events. "Nor did she just cheer," noted The Sporting News, "She jumped up and down on both feet, waved her arms, called out to Johnson. . . . The picture of sedateness on her arrival, she left as rumpled, as tired, and as happy as the thousands of other fans."

Meanwhile, Clark Griffith was becoming similarly unhinged. Normally when a president would leave the game, Griffith would escort him out of the park. On this occasion, he completely forgot about the First Couple and left them to find their way out by themselves.

In Game Five of the 1925 World Series, however, Cal escaped from Griffith Stadium in the third inning, with Pittsburgh leading Washington 2-1. But Grace stood her ground and remained. The Senators rewarded her by tying the contest on right fielder Joe (not Bucky) Harris' home run. The home team ultimately lost 6-3, but the First Lady hung on to the end, cheering loudly as usual, and scoring every play.

When Grace could not get out to a game, she employed that newfangled device, radio, to pull one in, either at 1600 Pennsylvania Avenue or aboard the Mayflower, the presidential yacht. If nothing was available over the airwaves, she would saunter over to the White House telegraph room to learn the latest scores.

If you follow the link, you can read more about Grace's fascination with baseball.
Posted by Jennie W at 2:10 PM

We know that Richard Nixon and Gerald Ford were both avid sports fans. George W. Bush is a baseball fan. But was there another First Lady with an interest in sports like Grace Coolidge?

I can't think of one, but I will do some more research. Some First Ladies have been very athletic - Edith Roosevelt or Lou Hoover, for instance - and would have been interested in sports in general.