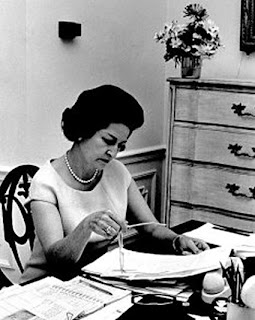 The office of the First Lady has really evolved from a mere hostess to a powerful position over the years:
At least as long ago as 1889, first lady Caroline Harrison had a niece who served as social secretary (and who lived in the White House). Florence Harding had a "funded staff" (a social secretary and an assistant); Grace Coolidge and her social secretary, Polly Randolph, worked together in a small White House sitting-room (Mrs. Coolidge often typed her own letters at her desk there); Lou Hoover used a sitting-room connected to her bedroom, had a staff of four ("the largest to that time," explains Anthony) whose office was on the third floor of the White House and whose salaries were paid for by Mrs. Hoover herself.

Eleanor Roosevelt had a staff of only two (Malvina Thompson and social secretary Edith Helm); at first, the three of them had a second-floor office in the Mansion, but later initiated the use of a first lady's office in the newly constructed East Wing. Bess Truman had a personal secretary and used Mrs. Roosevelt's former White House sitting room while two other secretaries, plus the White House Military Aide, were located in the East Wing. Mamie Eisenhower had Mrs. Roosevelt's old desk placed in her bedroom, but her bed was her favorite headquarters facility. Mamie's social secretary headed a small staff in the East Wing, but Mamie only visited that area once. Jackie Kennedy, according to Anthony, had a staff of forty in the East Wing, directed by the social secretary; her unofficial office was the Treaty Room on the second floor of the Mansion. Lady Bird Johnson and Pat Nixon both used a sitting room/dressing room adjacent to the bedroom as their offices; their staffs were in the East Wing. Betty Ford used the Treaty Room as her office and also had a desk in her sitting room.

Roslynn Carter broke tradition and set up an office for herself in the East Wing -- and for the first time it was formally called "Office of the First Lady." Her principal assistant was the first to hold a separately identified position with the title "chief of staff to the first lady." Nancy Reagan moved her office back into the center of the second floor of the Mansion, and also benefited from the 1978 statute (PL 95-570) which authorizes "assistance and services . . . to be provided to the spouse of the President in connection with assistance provided by such spouse to the President in the discharge of the President’s duties and responsibilities."

Hilary Clinton broke tradition even further: the President gave her an office on the second floor of the West Wing itself; her staff of twenty (plus another fifteen interns and volunteers) was divided between a suite in the Eisenhower Executive Office Building and the traditional locus of the East Wing.

First Lady Laura Bush has her office in the East Wing, delivered the President's radio address to the nation on November 17, 2001, and -- at the time of writing -- had taken one foreign trip on her own, meeting and talking with several foreign chiefs of state. 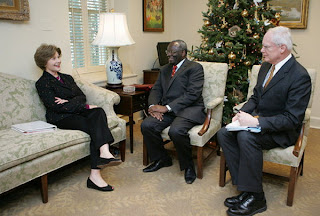 As you can see, the position has really changed – Martha Washington would probably not recognize much of the role!
Posted by Jennie W at 12:12 PM

As I recall, Martha Washington was not interested in the "role" of First Lady. She was the hostess for political receptions during her husband's tenure, but I believe she spent more time in Mount Vernon than in New York, where the first capital was.