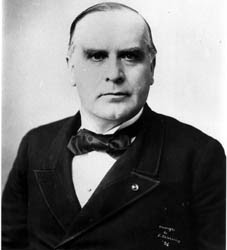 Before being elected President, William McKinley was the Governor of Ohio. As Governor, some of his accomplishments were:
As governor McKinley developed a new and more comprehensive tax system which, by levying excise taxes on corporations, aided in the reduction of the state debt. At his insistence legislation was enacted which required installation of certain safety devices on railroads. During the industrial strife of the nineties he introduced and promoted the enactment of a law which set up a state board of arbitration. This board settled numerous labor disputes but failed to prevent the serious coal strike of 1894. At the height of the strike McKinley called out the national guard to prevent the destruction of private property in several strike-bound counties. That same year he used the guard to put down a series of lynchings. In 1895 he organized private groups to aid in rendering assistance to the suffering unemployed coal miners in the Hocking Valley.

Just some background on one of presidents!
Posted by Jennie W at 6:57 PM

On an auto trip through the midwest two years ago, I stopped at some of the presidential historic sites in Ohio and Indiana. For McKinley, I noted from the guidebooks that there are two sites, one in his birthplace of Niles, and another in his adult home, Canton. I chose to go to Niles and, while it was nice enough, I get the impression that I would have seen more in Canton.

What is advertised as the McKinley Library in Niles is not a presidential library by the usual definition of that term. It is the public library for the town, with a small McKinley museum attached. There were some interesting exhibits there, despite its being smaller than most presidential historic sites.

The house in which McKinley was born has long since been torn down. They have built a reproduction of the house. It's not the same as seeing the real thing, but they did a good job with it.

That is true, but if you go to the musuem in Canton, you might still be disappointed. I've been to both (I live in Ohio) and the one in Canton really is more of a general musuem - they have dinosaurs and a lot of great kids stuff. There is a library attached to that if you are interested in research and all the McKinleys are buried there. There is one room that is devoted to McKinley, but honestly - I wasn't that impressed as it desperately needs a spruce. The National First Ladies' Library in Canton is actually also a McKinley museum. There are two buildings and one was the ancestral home of Ida McKinley and that house tour is mainly about her family (I give tours there...believe I can recite it all to you). One of the rooms is a McKinley study. I've put links for two posts I've done on the NFLL and Ida, but I just realized I haven't posted on either of the McKinley musuems, so I will probably do that sometime in the future.