I watched a program on Jefferson’s architectural revolution. While Monticello is talked about all the time, this covered three other major architectural undertakings of Jefferson’s. Jefferson was a self-taught architect, yet he was one of the best America ever produced. He is the only architect with TWO buildings on the UN’s Heritage list (Monticello and the University of Virginia). 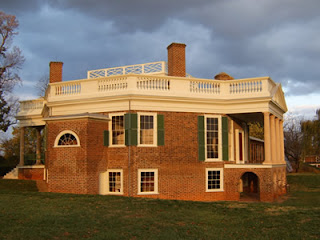 This was a very interesting program and well worth the time to watch!
Posted by Jennie W at 7:37 AM