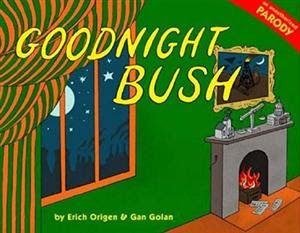 When my two boys were toddlers, I read the book Goodnight Moon to them often. They liked the book and I did too. It was a nice comforting book which usually resulted in a smooth transition to bedtime.

As such, I was a bit surprised (bemused? unamused? conflicted?) by the article Goodnight and Good Sales by Brian No at Newsweek. Goodnight Bush, an unauthorized parody of Margaret Wise Brown's classic children's story Goodnight Moon, has become a surprise best seller since its release a few months ago.

No wrote, "In the alternate universe of Goodnight Bush, written by writer and producer Erich Origen and artist-writer-activist Gan Golan (they met while working for a dotcom around the 2000 election), a young George W. Bush sits in his bed, saying goodbye to various low points of his presidency. It's a darkly humorous book that wears its liberal bent on its sleeve—and leaves no controversy untouched, including the satire-resistant subject of 9/11. In a recent interview with NPR, the two writers were asked about sensitivity in depicting the Twin Towers as toy blocks with a toy plane toppling them over."

I once had a morbid thought as I read this great book to my boys. What if a condemned prisoner memorized Goodnight Moon and read it as his or her last words before execution? My wife got the chills as I related this to her. What better way to mock the victims who may have relatives witnessing the execution? Clearly, Goodnight Moon can be read to saying good-bye to life in general. Or, as this book shows, it can be read to say farewell to a politician one does not like.

No wrote, "For more than 60 years, children have oft been lulled to sleep in the closing lines of Brown's tome: 'Goodnight stars. Goodnight air. Goodnight noises everywhere.' In Goodnight Bush, that's been replaced with a more partisan, 'Goodnight earth? Goodnight heir? Goodnight failures everywhere.' Innocuous farewells such as, 'Goodnight nobody. Goodnight mush,' has been swapped for 'Goodnight allies. Goodnight Abu Ghraib 'Cheese!'' And who can forget about the 'quiet old lady whispering 'hush'? In Goodnight Bush, it's a 'quiet Dick Cheney whispering 'hush' to the child version of Bush, who's dressed in a flight suit. Perhaps even more captivating than the text are the images—a close replication of the original illustrations, but with every detail substituted by something from the Bush era."

I suppose anyone can do this with any American President. A Goodnight Lincoln could have been written by southern partisans in early 1865 welcoming the end of the Lincoln presidency which they would have believed resulted in grievous constitutional violations and the deaths of millions of Americans under Lincoln. How about a Goodnight FDR which cleverly rhymed what some saw as the undesired expansion of federal power? A Goodnight Nixon needs no explanation...

Should such a cherished children's classic be used in this way? How would Margaret Brown have felt? I am not sure about this. I appreciate the creativity in parodying this book and the strong passions behind it. I am not just sure if it is appropriate.

Oh well. Perhaps if Obama is elected his detractors can write a parody based on Color Kittens. I can also see a McCain presidential parody based on Sailor Dog. I guess children's literature is fair game for political parody.
Posted by M at 7:43 PM