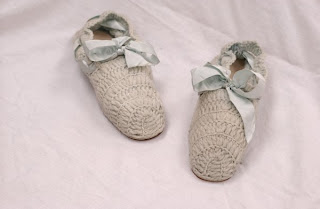 This is a pair of crocheted slippers that Ida McKinley made. You can read the description, but honestly, I disagree with about half of it, so I’d rather you not. (I don't blame the Ohio Memory Project, but rather the institution who holds these slippers...as a note unless you have young children, I do NOT recommend that particular museum....it is a great museum for little kids...dinosaurs and even live animals).

Ida made, by her own count, about 3000 pairs of these slippers that she would give away to anyone asking for a donation that they could auction off as something a First Lady made.

Now what I disagree with from the description (since you probably read it). First, you’ll note I have a different number of slippers. Second, we don’t know what Ida McKinley did at her father’s bank – I’ve heard cashier and loan officers, but the truth is we aren’t sure. All we know is that she worked there. Third, Ida did NOT have epilepsy. All her health problems date to her second pregnancy. It is very hard to reverse diagnose anyone, but since we can date her problems, that does offer some insight. As to her ailments, they were considered a problem when William ran for president and they made a point of using her picture to show she was willing and able to be First Lady. The McKinleys broke tradition and sat her by his side at dinners so that if she went into a seizure he could put a handkerchief over her face until she was done. Then he’d take it off and they’d go on as if nothing had happened.

Now I’ve also heard that some historians believe she used her health to keep William on a short leash because there are no known seizures after he died in 1901. She was living alone, so either way is possible – you can decide if you want to believe well or her or not.
Posted by Jennie W at 12:16 PM