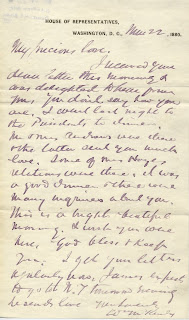 This is a fun letter that William McKinley wrote to his wife about a dinner he had with President Hayes. It is from the McKinley Museum and part of the Ohio Memory Project. I also find connections between past presidents and first ladies fascinating. Since most presidents were politically active (McKinley spent 14 years in Congress before becoming Governor of Ohio and then President) before they ran for president, it means they would have some connection to past administrations and these intersections intrigue me. In the letter I have posted here (and I also love handwritten notes – they seem so much more personal) is from March 22, 1880. McKinley notes that he “went last night to the President’s to dinner.” While he doesn’t describe the dinner itself, he mentions some people who were there, which included some of Mrs. Hayes’ relatives.
Posted by Jennie W at 12:12 PM