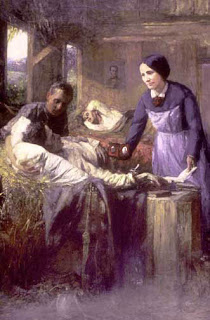 Emily Apt Geer has a great article on Lucy Hayes’ efforts during the Civil War. She spent time with her husband’s troops when she could:
Lucy Hayes deserved the popularity she enjoyed with the soldiers; she nursed them when they were ill, sewed and mended their uniforms, and listened to their troubles. One story that reflected her kindness appeared in the Ohio State Journal when Rutherford ran for President in 1876. A slightly abbreviated version follows:

James Parker of Trumbull County was jolly good-natured "boy" soldier. He expressed concern to his comrades because there was no one to mend his blouse
and sew on pockets. "Why Jim," they said "why don’t you take it to the woman who
does sewing for the regiment, and get her to fix it." When he asked where he
could find the woman, they told him that she was in Colonel’s tent.

Parker walked over to the tent, saluted Colonel Hayes and explained what he wanted. Hayes, with a merry twinkle in his eye, called Mrs. Hayes who promised to fix the blouse.

When Parker returned to his comrades and told them that he had left his blouse "with the woman to be fixed," they weren’t sure whether the joke was on him or themselves. Later in the day, when Parker appeared with his blouse neatly mended and two ample pockets in it, he was the hero of the company.

Later in April, the Twenty-third Regiment broke camp and started on the memorable campaign of 1864. For the first few days, the troops marched along the
Kanawha River. Lucy and several of the wives rented a small boat and steamed
slowly up the river, cheering and waving to the troops as they kept pace with
them. When the head of navigation was reached, the little craft turned and started downstream. As a veteran recalled, "Mrs. Hayes...stood aft and waved us an encouraging adieu, and the mountains round rang with the cheers of the brave
boys."