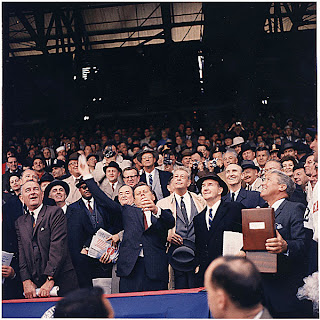 I thought I'd share something fun today. This is NARA's Document of the Day - President Kennedy throwing the first ball out for the opening of the 1961 baseball season (April 10, 1961).

Interesting picture if you look at the expression on LBJ's face!

Also, this is a picture you would not likely see again with other administrations since the Secret Service prefers the president and vice president not to appear together publicly.