An iPod? What do you think? 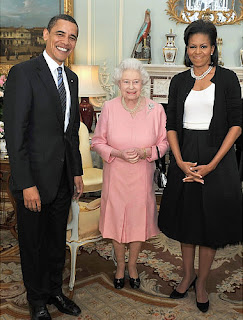 So what does everything think of the Obama's gift to Queen Elizabeth? This picture also really highlights how tall Michelle Obama is! [I refuse to acknowledge that the Queen is short since I'm the same height!] As I started this with - the Obamas gave the Queen an iPod:
In the exchange of gifts, the Obamas gave the queen an engraved iPod loaded with the Broadway show tunes Elizabeth loves and a rare book of songs signed by legendary composer Richard Rodgers. The royals gave the Obamas the usual silver-framed photo of themselves.
Actually after reading about the specific gift, I found it a much more thoughtful gift than my first reaction was, although I admit - I can't see Queen Elizabeth using an iPod! You can take an opinion survey on this issue at the news article I linked if you are interested.
The Obamas seemed to meet with royal approval - at least according to the purse test!
Royal-watchers took careful note of the positioning of the queen's purse. It's always with her, and, when pointed at certain angles, it's said to signal to her attendants that she can't wait to escape from the frightful bores in her company.
But the Obamas apparently met with royal approval. The purse rested in the crook of the queen's left arm, which means that she's happy and relaxed with her guests
But the Obamas' driver was asked to move their car!
And this last picture is here just because I liked it! You always see pictures of the First Lady doing things like this - reading to children - but it is refreshing to see the First Couple doing it together! 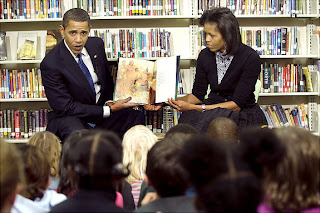 An interesting corollary to the story (and another of example of how the media are dying for controversy) is in this article: http://www.time.com/time/world/article/0,8599,1888962,00.html?xid=rss-fullworld-yahoo