Modern First Ladies have each taken up a specific issue. This recent article wonders if Michelle Obama may be spreading herself too thin by trying to cover too many topics:
Yet in the midst of all those themes, it isn’t yet clear whether her self-described core messages — about military families, volunteerism, and helping working women balance work and family life – are truly breaking through. Some wonder if she’s spreading herself too thin to emerge in the public mind as a leading voice on those topics.

One of Mrs. Obama’s main message thus far as been on military families:
Over the past year, Mrs. Obama has become increasingly committed to bonding with service families. Among her stops during the campaign, for example, were visits with Army spouses in Fayetteville, N.C., near Fort Bragg. Aides say she has been moved to tears by the stories of sacrifice she has heard, but the events are normally closed to the media, so the public doesn't get to see these emotional scenes. She has invited military spouses and their families to events in Washington, including having Shannon Kendall of Georgetown, Texas, and her husband, Maj. Ryan Kendall, an Iraq veteran, join her at President Obama's recent address to a joint session of Congress.

On March 12, she visited Fayetteville again and met with two dozen members of military families. "As my husband, the president, said recently in his address at Camp Lejeune," the first lady noted, "service doesn't end with the person wearing the uniform; the war doesn't end when a soldier returns home. Military family members have their own special courage and strength." She stopped at the Prager Child Development Center at Fort Bragg, where she read The Cat in the Hat to a dozen preschoolers. She also chatted with four toddlers who were making thank-you cards for wounded soldiers

As Mrs. Obama gets settled into her role as First Lady it will be interesting to see how her mission continues to evolve.

This picture is from the Obama's European trip and I just thought I'd include it as I rather liked it. 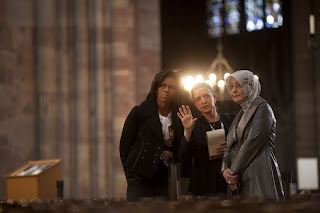