Eleanor Roosevelt and the Tuskegee Airmen 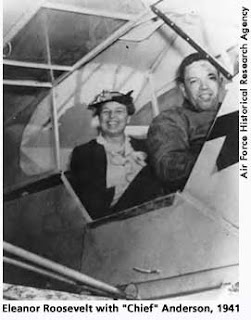 We were recently in the South and one of our stops was the Tuskegee Airmen Historic Site in Alabama. Eleanor Roosevelt not only visited this site, but insisted on a ride with one of the black pilots:
When Eleanor Roosevelt visited Tuskegee Army Air Field in 1941, she insisted on taking a ride in an airplane with a black pilot at the controls. ER's pilot was Charles Anderson. ER then insisted that her flight with Anderson be photographed and the film developed immediately so that she could take the photographs back to Washington when she left the field. ER used this photograph as part of her campaign to convince FDR to activate the participation of the Tuskegee Airmen in North Africa and in the European Theater.

Eleanor also carried on correspondence with Tuskegee and you view her letters at the FDR Library site.

I thought I'd post one of the letters here for you:
Letter from Eleanor Roosevelt to Cecil Peterson, May 28, 1942

Miss Ilma has given me your name because I am a member of the board of the Young Men's Vocational Foundation and she suggested that you might like to have an occasional letter and packages sent you.

I am sending you some hard candy and a book which I thought might interest you, and if you will write me what kind of things you are interested in, what you would like to have sent you, and keep me in touch a little bit with what you are doing, I hope I can be a more intelligent correspondent.

I hope you get on well in the Army and that you will write me.

With all good wishes, I am

It is wonderful that Eleanor Roosevelt give her interest and backing to the Tuskegee Airmen. I am sure her input and influence had a great part in their moving forward in WWII. Without them, many more would have died than did.

I salute Mrs. Roosevelt, the Tuskegee Airmen and their families.