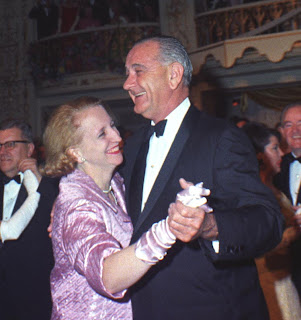 Margaret Truman Daniel and her family attended the 1965 inauguration of Lyndon B. Johnson. Now the LBJ library (picture is from here) notes that LBJ danced with Margaret by lifting her out of her box and also notes that when the Vice President tried to lift her back in, she “protested, saying “Oh no, you couldn’t possibly do it.” She smiled and climbed on top of a chair to get back in her box.” A nice story, right? Well, Margaret’s son, Clifton, tells a much more entertaining version in a recent article from Prologue (you might remember my earlier post from this article):
There were four inaugural balls that year. Mom was the hostess for the one at the Mayflower Hotel. Protocol dictated that upon arrival, the President was to dance first with the hostess, then with his wife, and then with all the other wives. Then he had to shake hands with all the men whose wives he'd been dancing with. Because it was so time-consuming, there was little room for dillydallying, which was why President Johnson was a bit concerned to find that there was no way to get my mother out of her VIP box onto the ballroom floor.
Many ballroom boxes are designed with doors leading directly onto the dance floor. The Mayflower's was not. To get out, you had to leave by the door at the back of the box and walk down a corridor to one of the main ballroom doors. Upon arrival at the ball that night, President Johnson found that there were hundreds of people between him and door my mother would have to use, so he wasted no time. He simply reached into the box and hauled her out.
For years, I was given the impression that this was a delicate operation with my mother simply floating over the box railing in the arms of the President of the United States. That was until I found photos tucked into the back of a family photo album. There are arms and legs all over the place and it looked like several Secret Service agents were involved.
It might have been even worse when it came time to put Mom back because by that time, President Johnson had handed her off to Vice President Hubert Humphrey, who was about half his size. Mr. Humphrey, however, wasted not an ounce of muscle on my mother. He simply called for a chair and held her hand while she stepped back by herself.
Isn’t that more fun? Clifton also has more to say on the Johnsons – also quite entertaining!
The day after President Johnson's inauguration, we were scheduled to have breakfast with him and Lady Bird Johnson in the White House family quarters. It took us forever to get ready since we had to put on our best clothes, which for William and for me meant matching gray slacks, white shirts, blue blazers, and clip­on ties. After all, we were not only going to the White House, but we had a 10 a.m. train back to New York, and you always dressed for travel.
We arrived upstairs at the White House and, when the elevator door slid open, I remember being nonplussed—and a little put out—that the Johnsons apparently had not had to go through the same morning rigmarole. There stood the First Lady in a canary yellow dressing gown worn over a canary yellow nightgown and canary yellow slippers. Every hair was in place, and her makeup was perfect. It looked like she had been waiting for us outside the elevator all night long.
…after greeting us at the elevator, Mrs. Johnson led us down to the East Sitting Hall, where coffee was served and we waited for the President. He strolled out a few minutes later in his pajamas, bathrobe, and slippers, and endeared himself to us children by bypassing the adults and plunking down in front of us.
"How'd you boys like the tour of the White House the other day?" he asked. "Did you meet the dogs? I understand you went to the National Air Museum. How was that?"
In the middle of the conversation, he suddenly stood up and said, "I think I have something you boys will like."
With that, he left, returning a few minutes later, his hands full of everything he could find that had his name on it—stationery, envelopes, pens, pencils. It looked like he had cleaned out his desk. He started divvying up the loot. "One for you, one for you, two for you, two for you . . ." He'd almost finished when Lady Bird Johnson reached across the table and snatched something out of his hands.
"Lyndon, for God's sake," she said. "You can't give them those."
Apparently he’d tried to give us each a book of White House matches.
I also like this little aside he has after this story:
Years later, after I gave a speech at the Johnson Library in Austin, Texas, Mrs. Johnson hosted a dinner for me on the library's top floor. As the meal began, she announced that she had a small token for me and asked me to hold out my hand, into which she dropped two books of matches from the LBJ Ranch.
I don’t know about you, but I find looking at the inauguration through the eyes of a child to be fun – and hey, it made me laugh!
Posted by Jennie W at 10:45 PM