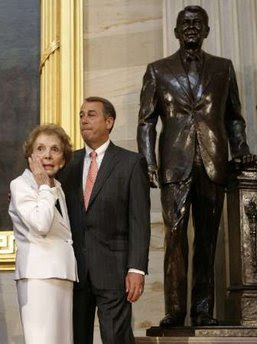 A new statue of Ronald Reagan was unveiled today at the Capitol.

President Obama also recently signed the act to set up a commission for Reagan's Centennial, which will be in 2011.

So who is Reagan replacing at the Capitol? Thomas Starr King, a 19th century San Francisco Unitarian preacher. This article also gives a little information on the creation of the statue and Mrs. Reagan's assistance with it:
When Nancy Reagan saw a model of her husband's statue, she complained that the late former president's pants were too long and that he looked a little too serious.

So Chas Fagan, a painter and sculptor from Charlotte, N.C., went back to work. He made the pants break above the shoe and studied videos of the president telling jokes. He settled on Ronald Reagan's expression just before the punch line, which showed a hint of a smile every time.

I've been to the Reagan Library three times and the last was to see his final resting spot.

Republican, Democrat or any third party take note: Greatness only comes along once in a generation.

President Reagan was that!

May the current president learn from him!