Ike in the Golf Hall of Fame 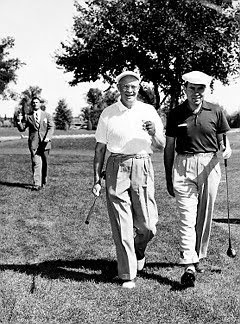 (Eisenhower and Nixon)
President Eisenhower is now a member of the Golf Hall of Fame. He was inducted based on his ability to popularize the game of golf rather than his personal ability. Details can be found at President Dwight Eisenhower elected to World Golf Hall of Fame by Hank Gola at the Daily News. The article notes:
The WGF's Board of Directors has selected the late President Dwight D. Eisenhower for induction in the Lifetime Achievement Category.
Certainly no statesman since Mary Queen of Scots did as much to popularize the game. With Ike and Arnold Palmer leading the way in the '50s, golf took off as a mainstream, every man's sport.
According to the WGF's release, Don Van Natta, Jr., author of "First Off The Tee", wrote that when Eisenhower too office in 1953, 3.2 million Americans played golf and by 1961, that number had doubled.
Arnold Palmer said, "One would be hard pressed to find any single person who did more to popularize the game of golf, not only in the United States but throughout the world, than President Eisenhower. His visibility, coupled with his passion for the game, were the inspiration for literally millions of people picking up the game for the first time. Those involved in golf today owe him a great debt of gratitude. Since I was fortunate enough to have enjoyed a warm, personal friendship with the President, I had the opportunity to see first hand his passion for the game and the impact he had on its broadening appeal worldwide."
The article notes that have Ike played 800 rounds during his eight-year term and spent so much time at Augusta National, it was practically a second White House.
More details can be found in the book Don't Ask What I Shot - How Eisenhower's Love of Golf Helped Shape 1950s by Catherine Lewis.
Posted by M at 12:41 AM