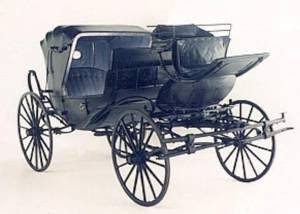 When you say Studebaker, you probably think of cars, but Studebaker began by making carriages and they actually made carriages for four presidents (Grant, Benjamin Harrison, Lincoln and McKinley). The Studebaker National Musuem has an online exhibit that gives the background on these four presidential carrianges. They also have a specific exhibit devoted to Lincoln's carriage (pictued above).

I found the information on McKinley's carriage quite interesting:
This carriage was custom-built for President William McKinley in the mid-1890s for service at his home in Canton, Ohio. It was designed for summer use with rubber tires and a removable extension top. The seats have spring backs and cushions.

\In early September, 1901, McKinley took the carriage to the Canton railroad station where he boarded a train for Buffalo, New York. He was scheduled to deliver an address at the Pan-American Exposition there later in the week. On September 6, McKinley was shot by anarchist Leon Czolgosz on the exposition grounds. Despite emergency surgery, McKinley died of complications from his wounds eight days later.

The carriage remained in the McKinley family until 1913, and changed hands three times before the Studebaker Corporation purchased it on November 5, 1924. At that time the historic vehicle was authenticated by John Bederman, McKinleys personal coachman, and Albert Lewis, who cared for the carriage after the Presidents death.
Posted by Jennie W at 9:39 PM