Shorts or no Shorts? 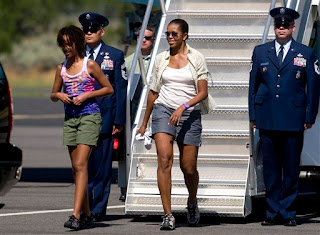 Okay, I'm behind. I freely admit it! It's been a busy summer and now it is the first week of school. Anyway, I'm just getting to the shorts discussion. I actually saw it when it came up, but then got distracted.
The question boils down to - should a First Lady be allowed to wear shorts. For some people, it seems the answer is no, but the majority of Americans are fine with it. The Today Show polled their audience, who came up 83% pro-shorts. The Mrs. O fashion blog that Michael mentioned earlier (thanks Michael!) agrees as well - summer in the Grand Canyon is a fine reason to wear shorts according to them! I think many Americans would have a problem if she wore them to a state dinner, but most of us would wear shorts in the Arizona heat - why shouldn't our First Lady? Actually, I was reading more from the fashion blog and one of her dresses from that weekend was from Target!
Now while I was over at that fashion blog, I noticed a really fun series they are doing on past First Ladies and their summer vacation wardrobes. The posts up so far are:

I, like Michael, am not that interested in fashion, but I found this series to really interesting as it gives us a chance to see the women in a more informal setting and I think some more of their personal tastes.

The Mrs. O blog also did a series of post on inaugral gowns leading up to the Obama inauguration. I actually went to find these posts, but all the pictures were now missting, so I'm not going to bother linking them (I'm actually only writing this because I was rather annoyed to put in the effort to not be able to actually view the entries!).