All the President's Clothes....

Brooks Brothers is currently the oldest men’s clothing store in the United States since it has been operating since 1818.

Some researchers have speculated that Brooks Brothers gained the attention of future presidents during their military careers since the company began creating military uniforms as early as 1835. Early 19th century members of New York’s National Guard wore uniforms created by Brooks Brothers and is is said that the Brooks Brothers’ archives preserves among its documents a handwritten order then Quartermaster of the Army, Chester A. Arthur, later to become one of American history’s most respected presidents, for three hundred overcoats for a Union regiment, dated 1861. Arthur held the post of New York’s quartermaster for the first two years of the Civil War, and made a huge contribution to the raising of the volunteer forces….In the last four months of 1862 Arthur and his department completely clothed, and equipped, over seventy regimental-sized units.

Theodore Roosevelt’s uniform he wore as commander of the 1st US Volunteer Cavalry Regiment during the Spanish American War was made by Brooks Brothers according to Roosevelt’s specifications.

The frock coat Abraham Lincoln wore at his second inauguration was custom-made by Brooks Brothers and had an American eagle embroidered on the lining. The eagle carried a banner in its beak that read, “One County, One Destiny.” The Brooks Brothers website identifies this frock coat as the one that Lincoln had with him the night he was assassinated at Ford’s Theater, and uses the picture seen below to illustrate the coat. Over the years there have been numerous amounts of speculation regarding the authenticity of Lincoln’s clothes from that fateful night. 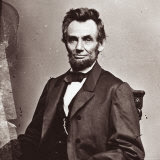 This website from the Chicago Historical Society details the odyssey of determining the authentic clothing Lincoln had on during his second inaugural. If you scroll to the bottom of the each page and hit NEXT you can see the entire effort to identify the proper clothing. The Donn frock coat in the possession of Alphonse Donn, a White House door keeper during the Lincoln administration was finally identified as the Brooks Brothers coat. Mary Todd Lincoln gave Mr. Donn the clothing ten days following the President’s assassination.

In 2007, an article in The Seattle Times confirms the Donn/Brooks Brothers frock coat is the proper article of clothing:

There are bloodstains, too, on the black, double-breasted frock coat he wore that evening [the evening of the assassination] as he sought to relax, with the four anguished years of the Civil War coming to a close.

Blood is also on the overcoat that curators think was over the president's shoulders or the back of his chair. Embroidered in the black lining of the coat, made for Lincoln's second inauguration, are an eagle, shields and the words "One Country, One Destiny."

The article further advises the coat was in the process of being stored during renovations at Ford’s Theatre.

Another article from October, 2008 from the San Diego Tribune discusses how the “one nation, one destiny” coat would be displayed and questions are raised if the coat should be displayed at all since light could begin to harm the historical artifact.

Today the renovations are completed at Ford’s Theatre and a page at their website advises the coat is on display. but it is not the original. A replica is used.

Other Presidents also preferred Brooks Brothers clothing including Herbert Hoover. He liked their Henley undershirts, and Franklin D. Roosevelt wore a cape Brooks Brothers made for the U.S. Navy.

One particular clothing collection….the “Brooksgate” collection was favored by President Nixon. Do you see some irony there?

what about ulysses s. grant