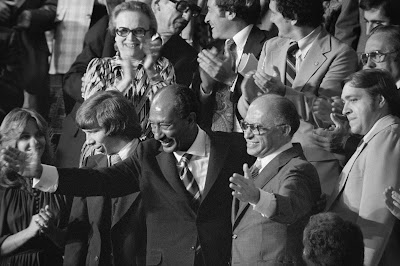 Camp David Accords -- Framework for Peace is a survey of the 1978 Camp David Accords between Egypt and Israel, with sections: Prelude, Preparations, Negotiations, and Legacy. It is a good tour although the quality of the pictures are low. It does give a day-by-day overview of what President Carter and the other parties in the talks were doing.
From the site:
The history of Arab-Israeli relations is one of bitter conflict. A history with roots deep into the past and whose progeny have entangled the entire modern world. Every generation since World War II has witnessed the violence and terrible suffering endemic to this region. And often the region's suffering has spilled over. Recent history, however, has promised hope. The beginning of that promise, the framework for peace, was built at Camp David in 1978.
This exhibit, produced by PRESIDENT and the Jimmy Carter Library, explores the negotiations, their inception, and legacy.
Posted by M at 6:44 AM