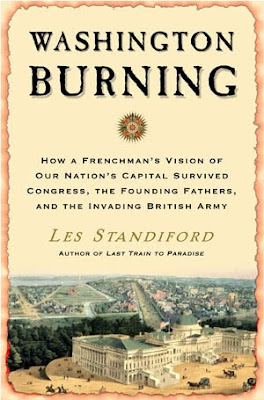 Book Review: Washington Burning: How a Frenchman's Vision for Our Nation's Capital Survived Congress, the Founding Fathers, and the Invading British Army

The title:Washington Burning is slightly misleading. The subtitle of this book, “How a Frenchman’s Vision of Our Nation’s Capital Survived Congress, the Founding Fathers, and the Invading British Army,” more closely describes what this book is all about. It is largely the story of Peter Charles L’Enfant and his struggle, along with that of our Founding Fathers, to create the new country’s Federal City.

The author, Les Standiford, is chiefly a novelist, though he has two other non-fiction books to his credit. Washington Burning benefits from his experience as a novelist and reads almost like a novel, yet it is well-researched. The narrative is not interrupted by footnotes, but the Notes section details the sources used in each chapter.

The book is divided into three parts, but fully half of the book, part one: Idea of Order, is devoted to the issue of choosing the site for our nation’s capital and L’Enfant’s vision for the new city. The choice of a site was highly political and divisive for the new country. “[Thomas] Jefferson, too, saw the so-called Compromise of 1790 as having averted disaster... ‘It is not foreseen that any thing so generative of dissension can rise again.’” The compromise involved federal assumption of debt incurred by the former colonies during the Revolutionary War and residence (or the seat of government.) The cities of Philadelphia and New York both fought to be the home of the government, with George Washington being one of the key proponents for locating the new government in a more central location. John Adams later questioned Washington’s motive saying “the decision had raised the value of the Washington and Custis property by 1,000 percent.”

Part two, On the Potowmack, continues the saga of the building of the Federal City with Adams surprisingly taking possession of the White House according to the schedule set by Congress 10 years earlier despite the many delays and the fact that only half of the rooms in the house were completed. Part three, Forged by Fire, finally brings us to the War of 1812 and the burning to which the title refers, although it still follows the story of L’Enfant and his attempts to be paid what he believed he was owed for his work on the city. It also discusses the rebuilding of the city after the British burned the capital and the White House. Standiford likens the British burning of our capital with the 9/11 attacks on our country.

This book is an interesting look behind the scenes, so to speak, of the early days of our country and the political maneuverings of the men who would be our first four presidents. It is also the story of the determination of one man, L’Enfant, to carry through his vision despite many hardships and obstacles.