As I thought, my questions were pretty easy - answered the first time!


The first president to have a Christmas tree was Franklin Pierce. As Tamahome Jenkins noted in the answer, I have also seen Benjamin Harrison listed for this honor. I've seen Pierce more regularly, so I've went with that answer. 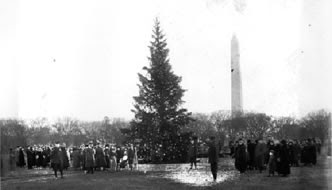 The first president to light the National Christmas Tree was Calvin Coolidge in 1923.


The Hoover Library has an exhibit that covers some Presidential Christmases as well as lists all the White House ornaments. 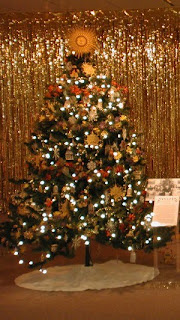 This gingerbread tree that is modeled after one Lady Bird Johnson put up was quite beautiful.


I also found this fun fact under the Teddy Roosevelt Christmas page:
Another fact about "TR" that most people probably don't know is that for many years he played Santa Claus at a school in Oyster Bay, New York, listening to the children and then giving them Christmas presents that he had selected himself.


Now the Washingtons wouldn't have had a Christmas Tree and Christmas was still quite controversial:
At a time when Christmas was still quite controversial in a new nation, Martha Washington's holiday receptions were stiff and regal affairs, quite befitting the dignity of the office of President of the United States and invitations were much desired by the local gentry. A Christmas party was given by the Washingtons for members of Congress on Christmas Day, 1795 at which a bountiful feast was served to the guests, all men with the exception of the First Lady!

Since there were no decorated trees in an official White House when George Washington was President, this tree in our exhibit includes decorations that could easily have been created and used during the holidays spent at the Washington's home in Mt. Vernon. Although not everyone celebrated Christmas in the colonies, the festivities at the Mount Vernon plantation in Virginia would start at daybreak with a Christmas fox hunt. It was followed by a hearty mid-day feast that included "Christmas pie," dancing, music, and visiting that sometimes did not end for a solid week. This, of course, is in stark contrast to the Christmas of 1777, spent by General Washington and his troops at Valley Forge where dinner was little more than cabbage, turnips, and potatoes.
Posted by Jennie W at 7:20 AM

Pierce put up his Christmas Tree in a private area of the White House, so it was for his family only. Benjamin Harrison was the first President to dedicate the White House Christmas to the entire nation.