It has been a real challenge for me this year to locate an image of President Obama’s Christmas greeting from the White House.

It seems Christmas was leaner at the White House this year. The White House did pare things down a bit like many Americans due to the economic crisis. Overall, there [appeared] to be fewer trees and decorations this time than in some over-the-top years past, and the same is true of the Christmas card list. Several hundred thousand [were] mailed out, paid for by the Democratic National Committee. That compares with 1.5 million sent out by George W. Bush in 2003, paid for by the Republicans.

Perhaps it is the reason why I had such a hard time finding someone online who had received a card and then posted the images….because the number sent had been scaled so far back.

I kept looking though.

Early on in December I did discover that the White House card was being printed by American Greetings, and… [featured] a gold foil-embossed presidential seal surrounded by a wreath, and a thin burgundy border around the edges. It [contained] the message: "May your family have a joyous holiday season and a new year blessed with hope and happiness."

It is a very elegant looking card. An interior view of the card can be seen at History Is Elementary. 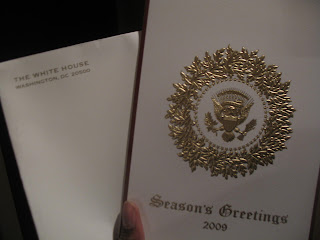 Through my search I kept finding the same Associated Press article that was reposted by news outlets and bloggers over and over describing Christmas preparations and the various decorations in each room. It used the White House as the source for the information found in the article.

Listings like this, this and this…..all basically saying the same thing word for word….Hundred of such articles can be found by Googling “White House Christmas”.

Over and over I read the same thing…..Decorations [in the State Dining Room] were designed to complement the coloring in the William Cogswell portrait of Abraham Lincoln above the fireplace on the west wall.

Here’s where they art mystery comes in. Examine closely the picture of the State Dining Room as it was decorated for the holidays I’ve included below. Notice the painting of President Lincoln above the fireplace. It’s been there awhile. 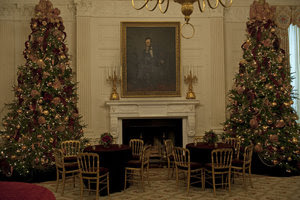 Now look back at the text in italics from the Associated Press article…..designed to compliment the coloring of the William Cogswell portrait of Abraham Lincoln.

The painting in the picture above….the way the State Dining Room looked in December, 2009…..is NOT the William Cogswell painting.

It is the painting completed by George A.P. Healy.

A Time magazine article from 1937 describes the Healy painting as it was donated to the White House from the estate of Lincoln’s daughter-in-law. The article states….One of the Lincoln family's few precious objects which had not already been given to the Government was the Healy portrait of Lincoln, which showed him, nearly lifesize, seated with legs crossed, one finger along his cheek, the other hand clutching the chair arm.

Hmmm…ok. Look back at the picture of the State Dining Room.

Isn’t that the Healy painting?

When I pulled up the William Cogswell painting I was shown the following image: 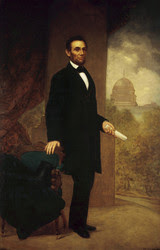 Yes, very different. The Cogswell image shows Lincoln standing, and the U.S. Capitol building is in the background behind him.

Nope, not the same.
I realize the Obamas have been changing some art around and have borrowed various pieces of art to use in the White House , but I don’t believe the Cogswell painting has replaced the Healey.

While both paintings are fantastic art treasures....it is a shame the painting in the State Dining Room has been misidentified over and over and over…..

Glad you found this - I wss hoping you would!

Me, too, Jennie. It just took me a little extra time this year. :)