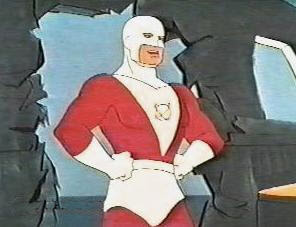 Here is some good TV I apparently missed. Super President was a TV show from 1967 to 1968. The President even had his own "bat cave" under the White House. Amazingly, the President's schedule allowed him to be a super hero on his free time and the media was clueless. Can you imagine the constitutional arguments of villains the President captures? Where was the President's search warrant? "But your honor, the leader of the free world, without any just cause, attacked my client. As my client was not read his Miranda rights, and the process of Habeus Corpus was not followed, I insist these charges be dismissed. Further, damage claims will be forthcoming in civil court." I hope this is issued as a DVD release eventually.

The American President, James Norcross, is given superpowers as the result of a cosmic storm. The President now has increased strength and the Metamorpho-like ability to change his molecular composition at will to any form required (like granite, steel, ozone, water and even electricity). A hidden panel in the Oval Office allows him access to his secret base, a hidden cave beneath the "Presidential Mansion" (a somewhat modified White House). Super President travels either by using a futuristic automobile/aircraft/submarine called the Omnicar, or by using jets built into his belt.

Despite the fact that the character's name is "Super President," for some reason only Norcross' chubby, pipe-smoking advisor Jerry Sayles knows that the leader of the Free World is also a red and white-costumed superhero in his off-hours.

Noted voice actor Paul Frees provided the voices of Norcross, Super President, and the show's narrator. Other voices were provided by several other noted voice actors of the era, including Ted Cassidy, Daws Butler, Don Messick, and June Foray.

A total of thirty episodes of Super President were produced. Two episodes appeared in each show, along with one episode of Spy Shadow about a secret agent who could command his shadow to act independently of himself.
Posted by M at 8:04 AM

This reminds me of "Reagan's Raiders", a short-lived satirical comic book where President Reagan and his cabinet transform themselves into superheroes and fight communist terrorists.

It's quite, well, something.