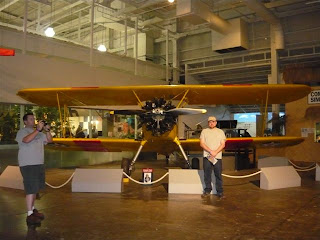 I have one last Hawaii post for you from our trip last month. One of the places we visited on Oahu (so in Honolulu) was the Pacific Aviation Museum (this is on Ford Island, right near the Pearl Harbor monuments - you actually take the shuttle from the Pearl Harbor site because this is on a military base and so you can't easily drive there yourself), where I found this interesting piece of presidential history for you! Above you see a Stearman N2S-3 (that's my husband and brother in the picture - my husband is the one by the plane, in case you were wondering), which was used to train WWII pilots - including George HW Bush. You can see the plane's log - with Bush's name in it - by the airplane at the museum.
It was in this aircraft that Bush soloed as the war's youngest aviator. This article from Smithsonian Magazine (written before this museum actually opened) tells us a little more about this plane and Bush's experience in it:
A Stearman N2S-3 Kaydet, covered with a polyethylene sheet, looked as clean as it must have on October 15, 1942, when it rolled off the factory line in Wichita, Kansas. This particular Stearman, serial number 07013, was flown by a future U.S. president. In December 1942, 18-year-old Navy aviator George H.W. Bush flew a solo sortie in the airplane. Years later he recalled his feelings about flying another Stearman: “I was a little scared at first, but the plane was forgiving, and I made it through,” he wrote to a reporter for this magazine in 1994.

If you are interested in seeing this museum and won't be visiting Hawaii anytime soon, you can watch a virtual tour at YouTube (it only briefly touches on this plane).
Posted by Jennie W at 4:12 PM

Thanks for the visit Jennie! We have a new online virtual tour up at http://www.pacificaviationmuseum.org/virtual/.