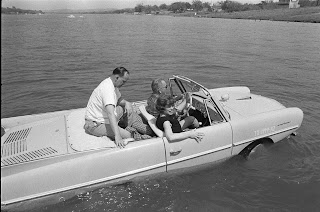 LBJ with Eunice Kennedy Shriver in 1965

A little bit about LBJ's car:
Built in Germany from 1961 to 1968, the Amphicar is the only civilian amphibious passenger automobile ever to be mass produced. A total of 3,878 vehicles were produced in four colors: Beach White, Regatta Red, Fjord Green (Aqua), and Lagoon Blue--the color of President Johnson's Amphicar.

Here is some general history on the amphicars (because honestly I didn't know they existed until I was researching this topic):
The backbone of the Amphicar's electrics is basically a Lucas 12 volt positive ground system with certain items such as the horn, lighting and switches made by other manufacturers such as Hella and Bosch.

The Amphicar has a top speed of 7mph on water and 70mph on land. Hence, it was dubbed the "Model 770". The Amphicar is moved in the water by its twin nylon propellers. A special two-part land-and-water transmission built by Hermes (makers of the Porsche transmission) allows the wheels and propellers to be operated either independently or simultaneously. The "land transmission" is a 4-speed-plus-reverse unit similar to those found in the old Volkswagen Beetles. The "water transmission" is a 2-speed offering unique to the Amphicar featuring single forward and reverse gears. In the water, the front wheels act as rudders.

When new the Amphicar sold for between $2,800 and $3,300, depending on the year. Later model years actually sold for less than those of early years. No 1968 model year Amphicars were directly imported into the USA. This was because of the U.S. Government's EPA and DOT regulations that went into effect beginning with 1968 model year vehicles. This caused a major financial disaster for the Amphicar Corporation since the USA represented about 90% of all Amphicar sales. The Amphicar factory in Berlin, Germany closed for good in 1968, and the remaining inventory of unused parts was eventually purchased by Hugh Gordon of Sante Fe Springs, California.
LBJ especially liked to "surprise" guests with his car by racing it into the water:
"The President, with Vicky McCammon in the seat alongside him and me in the back,was now driving around in a small blue car with the top down. We reached a steep incline at the edge of the lake and the car started rolling rapidly toward the water. The President shouted, "The brakes don’t work! The brakes won’t hold! We’re going in! We’re going under!" The car splashed into the water. I started to get out. Just then the car leveled and I realized we were in a Amphicar. The President laughed. As we putted along the lake then (and throughout the evening), he teased me. "Vicky, did you see what Joe did? He didn’t give a damn about his President. He just wanted to save his own skin and get out of the car." Then he’d roar."
-Joseph A. Califano, Jr
Posted by Jennie W at 12:52 PM