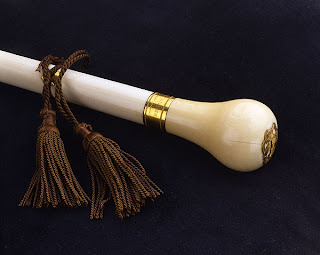 This is just a cool addition from my post yesterday. I was wandering around the web looking at JQA sites and found this. It is John Quincy Adam's "gag rule cane." JQA spent much of his energy in the House opposing the gag rule and this was given to him in honor of his efforts:
In April 1844, John Quincy Adams received this ivory cane from Julius Pratt & Company of Meriden, Connecticut. It was given to him for his efforts to end the gag rule, which prevented discussions in the House of Representatives about the abolition of slavery. Adams noted in his diary: “There is in the top of the cane a golden eagle inlaid, bearing a scroll, with the motto ‘Right of Petition Triumphant’ engraved upon it. The donors requested of me that when the gag-rule should be rescinded I would cause the date to be added to the motto.”

Meanwhile, Adams deposited the ivory cane “made from a single tooth” with the commissioner of patents at the Patent Office. On December 3, 1844, the gag rule was repealed, and Adams had that date engraved on the top of the cane. Adams willed the cane to the American people, and it was later transferred from the Patent Office to the Smithsonian Institution.
Posted by Jennie W at 6:15 PM