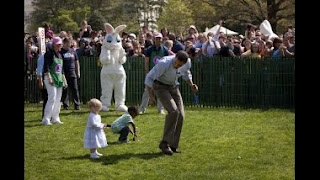 Anyone make this year's Easter Egg Roll? I didn't, but hey, looks fun (as if I have ever have...)! This year's theme was "Ready, Set, Go!" to dovetail with the First Lady's Let's Move initative.

In member of Patricia Nixon's staff put on a white fleece costume with ears, and so was born the tradition of an official White House Easter Bunny. When the event was canceled in 1984 because of rain, Reagan's staff — led by the wife of Attorney General Edwin Meese, wearing a disguise — organized a tour through the White House as consolation. Goody bags also were distributed.

love this resource , maybe next year ill get to roll eggs at the whitehouse :)