With John Paul Stevens' decision to retire from the US Supreme Court (he was appointed by President Ford in 1975), we will soon see another nomination process. I thought I'd post some information on the nomination process to start with:
Once the president nominates someone (usually with a personal phone call to that person) and releases the name, the Senate holds hearings. At these hearings, senators interview the nominee regarding his or her record as a judge and lawyer and where he or she stands on key issues. If the nominee has any dark secrets or past indiscretions, they are likely to come out in the Senate hearings, as well. Perhaps the most infamous instance of this took place at the confirmation hearings for Clarence Thomas, who was accused of sexual harassment by former colleague Anita Hill. He was eventually confirmed by the Senate despite the controversy. The overwhelming majority of Supreme Court nominees are approved by the Senate. There are some conflicting statistics, but the Congressional Research Service (CRS) reports there have been only 36 rejections out of 158 nominees [up until] 2007 [source: Congressional Research Service].


Until the 20th century, these hearings were held behind closed doors. In fact, the nomination process was almost completely invisible to the public. The president might seek the advice of friends and associates, but he made the choice on his own and even contacted and interviewed potential candidates on his own time. Today, members of the White House staff and the Justice Department are all involved in the decision, creating lists of candidates and sometimes competing with one and other to promote a particular candidate. Also, since 1930 the confirmation hearings have been completely open to the public. They have been televised since 1981 (Yalof, pg. 15).

There are several ways that a nominee can fail to become a Supreme Court justice. Seven nominees throughout history have simply declined the nomination. If it appears that there is great opposition to a candidate, the president can withdraw the nomination, or the nominee can withdraw him or herself. The Senate can also reject a nominee. Once rejected, a nominee can be submitted again, but this is a foolish course of action for the president unless something has changed that might lead to a different vote by the Senate. In 1836, Andrew Jackson nominated Roger Taney, but the Senate rejected him. A few months later, Jackson nominated Taney again. In that time, Congressional elections had been held, and the Senate was now more favorable to Jackson. Taney was confirmed (Aaseng, pg. 43). 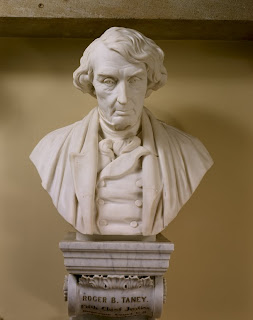 I thought I'd continue with more information on Jackson and Taney for you, which included a Cabinet rejection (the first) by the Senate:
Relations between the Senate and the president had become so embittered that the president delayed submitting the names of his recent cabinet appointees for confirmation until the final week of the congressional session. By June of 1834, the Senate stood evenly divided between supporters of President Andrew Jackson and anti-Jackson men. The president's assault on the Second Bank of the United States, launched two years earlier, had precipitated this split and led to the formation of the opposition Whig Party. In March, the Senate had censured Jackson for his efforts to remove government funds from that federally chartered quasi-private institution. When Jackson protested this extraconstitutional act, the Senate refused to print his message in its journal.


Nine months earlier, Jackson had selected Roger Taney, the architect of his antibank policies, as secretary of the treasury. Senators complained that the unconfirmed Taney held his office illegally. As Jackson biographer Robert Remini has written, "Whether this was true did not disturb Jackson one whit." Yet Jackson knew that sooner or later he would have to send Taney's name to the Senate and, in Remini's words, "he knew that senators would tear into the nomination like ravenous wolves to get revenge for the removal of the deposits and poor Taney would be made to bear much of the pain and humiliation."

Finally, on June 23, 1834, Jackson sent forth Taney's nomination. On the next day a probank majority in the Senate, including both senators from Taney's Maryland, denied him the post by a vote of 18 to 28, making him the first cabinet nominee in history to suffer the Senate's formal rejection.

The following year the deeply insulted Jackson returned Taney's name to the Senate as associate justice of the Supreme Court. Opponents blocked a vote on the last day of that session and tried unsuccessfully to eliminate one seat from the Court. When the Senate reconvened in December 1835, under a slim margin of Democratic control, Jackson sent it a new Taney nomination, this time to fill a vacancy for chief justice of the United States. Following extended maneuvering and bitter debate, the Senate confirmed Taney.
Posted by Jennie W at 8:54 AM

I fixed it, but where it is wrong is the site I'm quoting. I'll try letting them know (if I can figure out how). If you check the link they provide to CRS, it is correct there.

Thanks for pointing it out - I read over it, made the obvious correction in my head and didn't notice!