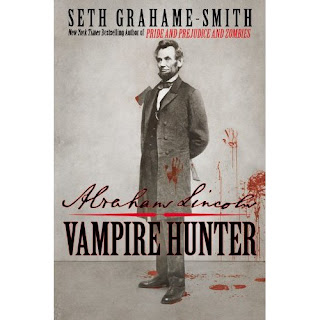 I have read many books about Abraham Lincoln. However, I must add, I don't think any of them have been fictional. I changed this recently by reading Abraham Lincoln: Vampire Hunter. It is by Seth Grahame-Smith. The book is great! It provides a very different interpretation of Lincoln's life and presidency.
From the publisher:
Indiana, 1818. Moonlight falls through the dense woods that surround a one-room cabin, where a nine-year-old Abraham Lincoln kneels at his suffering mother's bedside. She's been stricken with something the old-timers call "Milk Sickness." "My baby boy..." she whispers before dying. Only later will the grieving Abe learn that his mother's fatal affliction was actually the work of a vampire.
When the truth becomes known to young Lincoln, he writes in his journal, "henceforth my life shall be one of rigorous study and devotion. I shall become a master of mind and body. And this mastery shall have but one purpose..." Gifted with his legendary height, strength, and skill with an ax, Abe sets out on a path of vengeance that will lead him all the way to the White House.
While Abraham Lincoln is widely lauded for saving a Union and freeing millions of slaves, his valiant fight against the forces of the undead has remained in the shadows for hundreds of years. That is, until Seth Grahame-Smith stumbled upon The Secret Journal of Abraham Lincoln, and became the first living person to lay eyes on it in more than 140 years.
Using the journal as his guide and writing in the grand biographical style of Doris Kearns Goodwin and David McCullough, Seth has reconstructed the true life story of our greatest president for the first time-all while revealing the hidden history behind the Civil War and uncovering the role vampires played in the birth, growth, and near-death of our nation.
The description above does a good job of introducing this book. In this alternate history, Lincoln becomes at an early age a vampire hunter and this shapes his entire life including his later political career. The American frontier is full of vampires up to no good and as Lincoln travels he moves further up the ranks of those fighting the vampire menace.
Eventually, Lincoln learns that slavery is an institution that vampires use to keep an easy source of human victims. The entire southern system is based on patronage from vampires. The decision to run for president and the ensuing American Civil War follow from this fact. I don't want to give anything away but I did not see the ending coming and it was very satisfying. (Did you know that John Wilkes Booth was a vampire?)
Seth Grahame-Smith is a good author and he paces the book well. His writing is interesting and it was hard to put the book down until I finished. My biggest critique is that he has Lincoln drinking alcohol at many points in the book. This didn't happen as he swore off alcohol early in life. Despite this, reading about Lincoln as a vampire slayer was a lot of fun.
Posted by M at 5:36 AM

This is such an interesting book. I'm an avid reader of historical fiction, and I know I will enjoy this piece! Thanks for posting about it, I wouldn't have known of it otherwise!

I, too, am excited to hear about such a book! Sounds so interesting. Vampires are the "in" thing right now. Historical fiction is the best escape!!!