Want to check our Eisenhower’s daily schedule? The Miller Center and Eisenhower Library have digitized it for you to check out! Want to see what the President was doing 60 years ago today?
The President’s Appointments
Tuesday, October 11, 1960
7:45 am The following people had breakfast with the President: Dr. James Killian, Dr. George B. Kistiakowksy, Dr. Herbert York

9:28 – 9:35 am The President saw the above group in his office – they walked over from the Mansion with him.

10:05 – 10:18 am The President greeted the participants in the International Field Hockey Festival that was held in the U.S. under the aegis of the People-to-People Sports Committee.
This then goes on to list the team members in case you were curious (can’t say I was, hence why I quit transcribing…).
The schedule even includes “off the record” by certain people and meetings. It also lists small things that make Eisenhower more human, like how he fom 5 to 5:35, he practiced golf on the South Grounds. 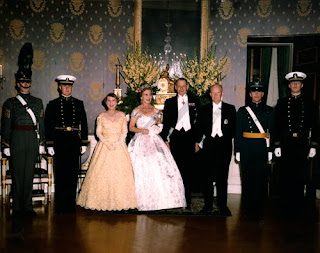 I also found the toasts from this dinner for you, just because it was fun. Here is President Eisenhower’s:

Your Majesties, and ladies and gentlemen:


It is indeed a signal honor to welcome to this Capital and to this house Their Majesties the King and Queen of Denmark. It is a country with which we are bound by ties of common ideals and principles, and ties of blood. Many of their people have come to this country--and indeed, in their country, they celebrate one of our holidays. It has a long and interesting history. And of course, standing as it does as a buttress between the Baltic and the North Seas, it is not strange that they have had a long maritime history.


But in these later days it is one of the key countries in the NATO alliance. It is a forward country. Geographically it looks across a very narrow gap to the threatening dictatorship that creates so much tension and indeed so much ill will in this world.


So we are proud to call them friend and ally. We need them. We hope that they feel, on their part, a sense of partnership and need for us. I am sure they do.


It is a romantic country. Many of you no doubt visited the Castle of Hamlet, and for my part at least, I was astonished to find out that Hamlet never lived in Denmark.


It is a country of people calm and serene; they seem never to be startled, never to be hysterical. One great man said of his people: they were always hysterical in victory and panicky in defeat. I think the people of Denmark would be the last people that you could say that about, if you went there and wanted to make a generalization.


In any event, it is a great country--a prosperous country--and above all, one with us, believing in the dignity of man and ready to put everything on the line; to risk even their existence in the defense of these values that free men feel are above all else in life.


So you can realize that it is with a great sense of distinction.
Posted by Jennie W at 12:53 PM