Anne Royall and the Nude President 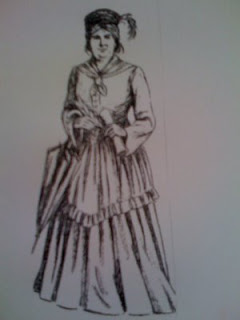 A few centuries ago, the President of the United States of America did not have a security detail. He could slip out of the White House and do as he pleased. And it wasn't much of a problem until President Lincoln was murdered in 1865.

President John Quincy Adams was well know for one habit. He liked to swim nude everyday in the Potomac River. No big deal back then, right?

Anne Royall was a journalist. However, she was not treated well by most of the public. Who wanted a female journalist in the early 19th Century?

However, she scored a major success when she intruded on the morning swim of the President:

President Adams regularly swam nude in the Potomac River. Anne Royall, the first American professional journalist, knew of Adams' 5 A.M. swims. After being refused interviews with the president time after time, she went to the river, gathered his clothes and sat on them until she had her interview. Before this, no female had interviewed a president.

This appeared to be a sound approach. Ms. Royall got her wish. It is hard to imagine today but it is a part of presidential history.
Posted by M at 4:53 PM

In honor of President Adams, I also went SDing in the Potomac River . . . just off Theodore Roosevelt Island, 200 yard down stream from the wooden pedestrian bridge, on Friday morning, 13 May 2011, and it could not have been more delightful. I found the water (alas, I left my thermometer back at the apartment of my cousin James, for whose graudation from Geo Washington University, I came to DC for the week-end)remarkably warm, well, cool, but certainly not cold. The brown, cloudy water had a visibility of about two feet, but no bad odor. Of course, I did not taste it, but did scratch my leg, which drew blood, when I struck a submerged branch. I would have swum out into the middle of the channel, but given my bare condition, hugged the shore, 20 feet away. The experience was an unalloyed pleasure, and gave me one more river to add to my list for SDing, i.e., three of which are a) Urubamba - Peru, headwater of the Amazon, b) Colorado - Arizona, c) San Juan/Green, tributaries of the Colorado, in Utah,d) Snake in Idaho, e) Salt/Verde in Arizona, only to swim in the 300 cfs Sycamore Creek with a buddy in which he nearly drowned after being ejected from our rubber two-man raft in March 2007. MFB

PS I asked to fishermen who I found fishing along the opposite bank of the Potomac whether they had ever eaten any of the bass/cat fish they had caught, and both answered no, expressing the fear that the fish contained dangerously high levels of chemicals.