Dentists were on my mind today (not because of anything fun I assure you), so I looked up the dental history of the presidents. 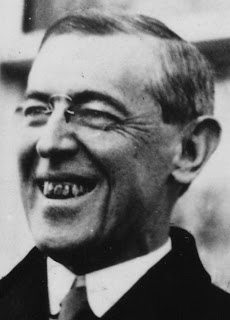 This picture of Woodrow Wilson shows his bad teeth. According to the site, this could have contributed to his stroke.

Washington's false teeth are well documented, but Adams refused them:
When Adams lost his teeth, he refused to wear false ones. As a result, he had a lisp when speaking. In later years Adams had trouble speaking. After encountering a fellow senior citizen in 1811, Adams wrote: "He is above 80. I cannot speak, and he cannot hear. Yet we converse".

The other bit that amused me was this on Lincoln:
A dentist broke off part of Lincoln's jaw bone while pulling a tooth -- without anesthesia [2c]. The extraction may have taken place in Louisville, KY in Sept. 1841.

It has been said that Lincoln was afraid of dentists (see episode above for a good reason why he might have been). In 1862 Lincoln developed a severe toothache and consulted Dr. G. S. Wolf, who had an office near the White House. As Wolf prepared to pull the tooth, Lincoln asked him to wait. Lincoln "took a container of chloroform from his pocket, inhaled it deeply, and sleepily gave the signal for the dentist to proceed".

George W Bush released dental records that you can check out online as well from 1973.
Posted by Jennie W at 12:05 PM