This post is pulled from EHT's blog, History is Elementary.

The White House theme this year for Christmas decorations is “Simple Gifts”….emphasizing what Mrs. Obama says are the simple things at Christmas time, such as music, children, friends, and family, and gifts made from nature.

However, the Obama’s dog, Bo, has his stamp all over Christmas at the White House this year. A larger-than-life version of the Obama family pet, made of 40,000 twisted black and white pipe cleaners, is one of the first things tourists and other guests will see when they stroll through the White House all decked out for the holidays.

Bo also features prominently in a 350-pound, white chocolate-covered gingerbread White House. A tiny version of the family dog made from almond paste sits on the edible grounds near of replica of Mrs. Obama’s fruit and vegetable garden. 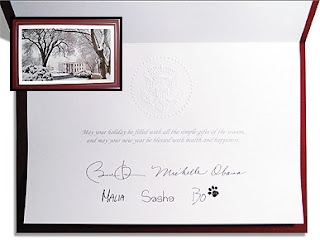 Notice everyone in the Obama family signed the card including Bo. His little paw print is seen along with everyone else’s. 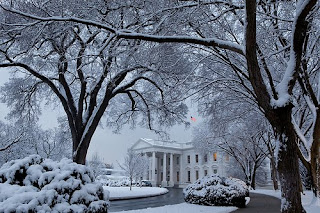 The cover of the card features a picture of the White House taken by Pete Souza following a snow storm on February 3, 2010.

Past articles of mine [EHT] regarding the White House Christmas greetings can be found here, here, here, and here, and I’m still looking for that original Wyeth painting that was used for the Nixon Christmas card from 1971.
Posted by Jennie W at 9:38 PM

I was in Washington a couple weeks ago and actually saw the card that was given to Congresswoman Susan Davis. Personally, I feel that this years Christmas card was a little cold, perhaps a representation of the difficult times that the United States are facing. I was actually pretty impressed with Bush's selection of Christmas cards.