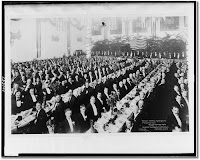 The three R’s is an old adage that every educator should know, right? Reading, wRiting and aRithmetic are the foundation of skills for any basic education, but when studying the Presidents we might want to add on another set of important letters…..the three P’s.
The three P’s stand for Presidents, oPossum, and Persimmon beer especially if we are discussing a visit William Howard Taft made to Georgia when he was the President-elect.

I stumbled across Taft’s visit to Georgia in January, 1909 when I was preparing a column I write regarding local history here. I had made a reference to Atlanta’s Municipal Auditorium, Atlanta’s main center for many important events for over 70 years. I discovered the first event at the Municipal Auditorium was a dinner for 500 given in honor of then President-elect Taft, and that one hundred Georgia ‘possums shared the spotlight with him that night.

A New York Times article from that week advises President-elect William Howard Taft and the Georgia ‘possum divided honors last night at the great banquet given by the Atlanta Chamber of Commerce in the Auditorium-Armory, the building which has not yet been completed, special arrangements being made for this dinner.

The visit to Atlanta was important to Taft. Back then Georgia was staunchly Democrat and deep divisions begun before the Civil War still remained, but I was happy to learn that even back then Georgians extended every courtesy and ounce of hospitality to Taft. However, in 1909 President-elect Taft was hankering for some Georgia ‘possum and Atlanta’s movers and shakers with the Chamber of Commerce wanted to procure the delicacy for him. I’ve written a little about the ‘possums, how they were gathered and prepared over at Georgia on My Mind.
.
The New York Times states talking through Georgia is a literal description of [the President-elect’s] trip….from Augusta to Atlanta, and he was met with cheering crowds, floral tributes, bands, and speeches of welcome at every stop.

A little bunch of violets, plucked from the grave of Alexander Stephens and presented by the grandniece of the distinguished Georgian touched a tender chord and brought forth a warm tribute to the memory of Stephens at Crawfordsville. Stephens you might remember was a Georgia politician and served as Vice President of the Confederate States of America as well as a U.S. Representative and Governor of Georgia.

Once he arrived in Atlanta, Taft gave a rousing speech on the steps of the Georgia State Capitol building to a large crowd and shook hands with thousands at a reception at his hotel that afternoon.

But the night…….the night belonged to the Georgia ‘possum and once the grand dinner was underway the President-elect’s ‘possum was brought to him in a chafing dish.

Five hundred eyes were on the President-elect as he lifted the top of the dish and gazed at the boast of Georgia.”

“The best dish I have toasted in weeks, said he, and judging from his satisfaction the ‘possum will become a regular White House visitor.

One hundred gallons of persimmon beer was also served along with champagne and claret. Persimmon beer, I’ve discovered is not intoxicating, but the champagne and claret presents a bit of an issue. At the time Georgia was a prohibition state yet apparently, some type of waiver was made for the occasion. Even The New York Times made note that Georgia was a prohibition state but the event was not a temperance event.

When addressing those in attendance at the dinner, President-elect Taft said he would do all he could to create a compact unit with the North and South. Taft pointed out in his remarks that past years had shown changing attitudes in the South regarding the North. He cited several things had helped with the change including the uniting effects of the Spanish American War and former President McKinley’s feelings towards the South. Taft also pointed out the secession of President Theodore Roosevelt following McKinley’s assassination and made sure he mentioned the fact that Roosevelt’s own mother originally hailed from Roswell, Georgia. Taft looked to the future as well citing the business development going on in Atlanta. It was, after all, the New South, right?

Methods of appointing and hiring governmental employees had been an issue for some time and a few of Taft’s remarks addressed the issue of filling appointments with Southerners by stating, “All I can say with reference to the future policy of the administration in the South on this subject is that I expect to spare no effort to find out the facts in respect to the character of the proposed appointees, and so far as in me lies to select those whose character and reputation and standing in the community commend them to their fellow citizens as persons qualified and able to discharge their duties well, and whose presence in important positions will remove, if any such thing exists, the sense of alienism in the government which they represent.”

Taft might have ruffled some feathers when he hinted at the abuses that are likely to arise when one party or the other controls for long periods of time. Was that a dig at Georgia’s Democrats who had been firmly in power for years and years except during Reconstruction?

Finally, Taft set out the agenda for his administration including revising the tarriff among other things.

You do have to wonder though.....if ‘possum ever actually made it onto the White House menu.
Posted by EHT at 11:01 AM