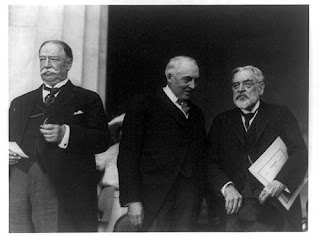 So I posted yesterday on a Taft judicial decision and what do I see today on Facebook, but this picture! Today in 1921, Harding nominated Taft for the Supreme Court. Anyone know who that third man is (no cheating if you have FB!)?

So in honor of just being "in tune," here is some information on the Taft Court!
When Chief Justice White died in 1921, President Harding made William H. Taft Chief Justice, the only former Chief Executive ever to hold the highest judicial office. Taft was vastly delighted, for the Chief Justiceship, not the Presidency, had always been the honor he wanted most.

In 1922, the Court reviewed the Child Labor Law. The Court decided that this law imposed a penalty, not a tax, and held it invalid. Chief Justice Taft wrote an opinion saying the Tenth Amendment reserves problems like child labor for the states to solve.

Not until 1941 did the Court overrule its child labor decisions. Meanwhile, reformers urged an amendment to protect children, and called the Court a "Supreme Legislature." They pointed out: "The vote of one member of the Supreme Court may exceed the collective power of 435 Representatives and 96 Senators, or even of 100,000,000 people."

Before gaining freedom to choose cases, the Court surprised many observers in 1923 by a choice of precedents to decide Adkins v. Children’s Hospital. In the majority opinion, Justice George Sutherland returned to the "meddlesome interferences" doctrine of Lochner v. New York, the bakery case of 1905.

Congress had passed a law to guarantee minimum wages for women and children working in the District of Columbia. A children’s hospital attacked the law; the case reached the Supreme Court. Five Justices agreed that the law violated the due process clause of the Fifth Amendment and the right to liberty of contract. Sutherland hinted that since women had won the right to vote they were legally equal to men, so Congress should not single them out for special protection.

"It will need more than the Nineteenth Amendment to convince me that there are no differences between men and women," Holmes retorted, dissenting, "or that legislation cannot take those differences into account." On the "dogma" of liberty of contract, he remarked: "pretty much all law consists in forbidding men to do some things that they want to do, and contract is no more exempt from law than other acts."

Taft also dissented. He had always supposed, he said, that Lochner had been overruled by later decisions; and, he added, poor workers cannot meet an employer on an equal level of choice. But Arizona, Arkansas, and New York saw their minimum-wage laws go down under the Adkins precedent.

By 1930 Harvard Professor Felix Frankfurter took stock: "Since 1920 the Court has invalidated more legislation than in fifty years preceding." When Taft retired that year, President Hoover wanted Charles Evans Hughes for Chief Justice. Debating the appointment, one Senator accused the Justices of "fixing policies for the people . . . when they should leave that to Congress," another called the Court "the economic dictator in the United States." But the Senate confirmed Hughes for Chief, and Owen J. Roberts for Associate a few months later.