I found myself in Nashville, Tennessee for the Fourth of July so Mr. Elementaryhistoryteacher and I ventured over to the Hermitage, the home of President Andrew Jackson to wander about and brave the heat. 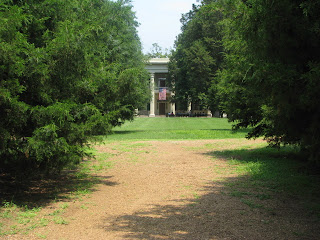 Here are 13 thoughts concerning Jackson’s home I brought home with me……
1. The Hermitage has been open as a public museum since 1889 and is the fourth most visited presidential mansion falling in behind the White House, Mt. Vernon, and Monticello.
2. As we walked the grounds it was hard to realize Jackson actually took a step down moving from his place on the Cumberland River called Hunter’s Hill.   The Hermitage property was less valuable than his previous place, but facing bankruptcy because of a bad investment Jackson was forced to sell.   Amazingly, a Jackson descendant owns Hunter’s Hill today and recently was successful in making sure that farm remains in a trust free from development.
The grounds surrounding the house are breathtaking.   I’m sure it was a bit more rustic when the property was working farm. 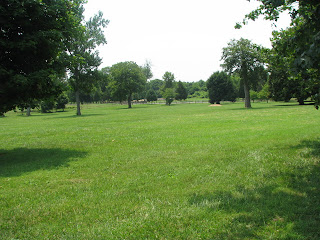 3. The Jackson’s moved into a two-story cabin located on the property Jackson first dubbed “Rural Retreat.”   The docents advised the cabin was nicely furnished with carpets and Jackson’s books and other furnishings.    The cabin walls were  even adorned with wallpaper.
4. At some point Jackson dropped the “Rural Retreat” name and began to call the plantation “Hermitage.”Researchers aren’t sure why he changed the name but it actually means the same thing and sounds fancier, I suppose.
5. The Jackson’s lived in the cabin until 1821 when they moved to a Federal-style brick home on a spot Rachel had chosen for their new home.   The gardens were designed by William Frost, a gardener from Philadelphia.   The original log home was stripped of its wallpaper and dismantled.   Two slave cabins were fashioned from the structure.
6. Pictures are not allowed in the house but there are a few online here and here.   The main entry has a graceful curved stairway and the walls are covered with block-printed wallpaper by Joseph Dufour et Cie of Paris showing scenes from Telemacus’ visit on the island of Calypso.    The background color in the wallpaper is bright blue, and it’s very striking as you enter the home.
7.  In 1831, additions were made to the house by adding wings designed by David Morrison to each side including the dining room shown below.   The bright blue paint is original as are the dining chairs.  One of the docents remarked like Jefferson, President Jackson enjoyed large meals attended by as many people as possible.   For this reason he had 24 of the dining chairs.
If you haven't picked up on it yet....bright blue was Jackson's favorite color. 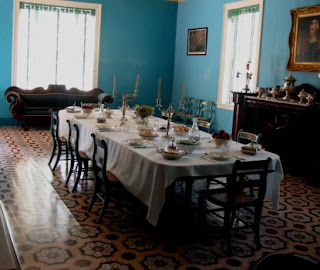 8. David Morrison also designed the “temple and monument” for Rachel Jackson which is now the resting place for President Jackson as well. 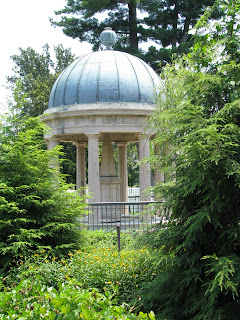 9. In 1977 when workers renovated the Jackson’s tomb they moved the limestone markers.   While Rachel’s marker was resting on dirt, President Jackson’s was not.   They found a four foot empty shaft.   At the bottom was another marker stating simply “Andrew Jackson”.   The find confirmed the rumors that Jackson had declared no dirt should ever rest on top of him.
10. In 1834, a fire gutted the central and eastern portions of the house leaving only the foundation and exterior walls intact.   President Jackson hired Joseph Reiff and William Hume to transform the home into a Grecian style temple but looks can be deceiving as you can see from the side view of the home below.   Many planters wanted the Greek style, but didn’t want to spend what was necessary to create a “total” look. 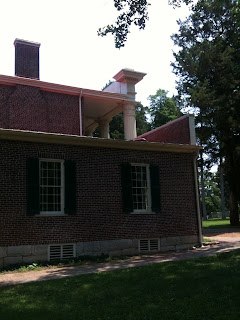 11. Since the Ladies’ Hermitage Association took over the home it has been restored to its 1837 appearance and is filled with original pieces belonging to the Jackson family.   Many of President Jackson’s personal items are in the home including his swords and books.   I especially enjoyed viewing his many leather bound volumes of newspapers.   Jackson subscribed to at least 15 different newspapers from all over the world.
12. Over the past 40 years archeologists have pieced together the history of the slaves who lived and worked at the Hermitage.   They have found nearly 800,000 articles representing the largest archaeological collection from an enslaved community in the New World.   The visitor’s center has an extensive display regarding many of the African Americans who lived on the property.
This image of Alfred is from the visitor’s center.   Alfred’s duties included taking care of the carriages and wagons.   After Emancipation he stayed and never left eventually serving as a caretaker and first tour guide.   He is buried in the garden near the President’s tomb. 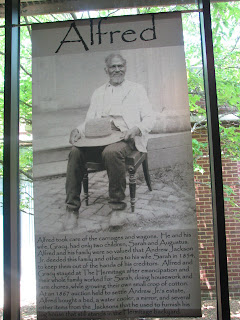 13. It is said that Jackson’s pet parrot, Poll, screamed curse words from the front porch during Jackson’s funeral. 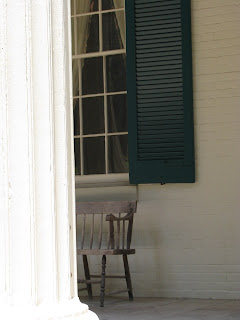 Head on over to History Is Elementary for a quick little guessing game regarding three items and what they were used for during Jackson's time here.